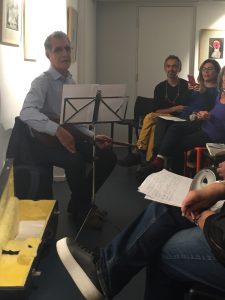 On Monday, November 5, the night before the American midterm elections, poets and fans gathered in the basement of the Poetry Café on Betterton Street in London. It was the monthly Exiled Writers Ink event; Abbas Faiz, an Iranian journalist, poet and broadcaster, hosted four writers living in England with Iranian, Aghanistani, Cypriot and German Jewish roots. All of them were children of exile in one way or the other.

I was working the door that night, and as the crowd drifted in, two young Americans arrived and asked if they could sign up for the open mike. They were in town, they told us, for a conference, and had seen us advertised somewhere on the web. One of them was wearing a sweatshirt: “Fight Evil With Poetry” I signed them up and as the readings began, and all through the night, I thought: “Can you fight evil with poetry?”
The theme of the evening was On the Outside, and Abbas began with a reminder to all of us to remember the limitations of language; behind words like “universalism”, “freedom” and “the other” lay power dynamics that remain hidden from view — language can mask as much as it can reveal.
Between sets, Abbas played the Du Tar, a traditional two-stringed instrument among the oldest in the world. He also recited sections of the long poem “Water’s Footfall” by Sohrab Sepehri (1928–1980), in an award-winning translation he co-authored.
The first reader was Jennifer Langer, founder of EWI, whose parents fled Germany and found refuge in England. A literary activist and academic, she has lived here all her life, yet her poetry is full of the ambiguity of multiple identities, sometimes being “an outsider” sometimes seeing others from the outside— writing with empathy about a new generation “on the edge of a continent” in Calais, yearning to cross the water to an island that may not welcome them.

Afsaneh Gitiforouz read two beautiful poems in Farsi and in English; these were poems about grief, about mothers left behind without sons, homes where the pond in the garden empty of fish becomes a symbol of loss.

Homan Yousofi was born in Kabul, grew up in London and until recently lived in Wales; a teacher and a surfer, he, too, returned to water images over and over again — rivers and waves and rain.
Aydin Mehmet Ali came to the UK as an unaccompanied minor, fleeing conflict in Cyprus. Poets and writers, she reminded us, are always outsiders because “we have imagination…that…can take you anywhere,” and “we demand that of other people.” In her tense prose narrative of an unnamed woman driving at night to escape the soldiers who have assaulted her, a water bottle becomes a touchstone, a relief, an emissary from a world before a nightmare.

Abbas finished with more from “Water’s Footfall.” The poet wrote: “I know what it is to be water,” and I thought about all of the images from the evening slipping from one mind to another, passing freely between us, and also about Abbas’ warning about language and power.

In a world where power uses language to distract us from what it is doing, poetry asks us to be in the moment and pay attention: not to persuade or argue but to invite us to share in an imaginative experience, bringing to it all we have and giving us only what we bring.

Poetry is like water — it seems insubstantial, running through our fingers, and yet, it seeps in; without it, we would perish — because without meaning making, we wither. Poetry is the most humble of arts — lurking in basements and existing on scraps, but every time we say it’s dead and gone, it finds a crack and slips through to invite another generation to dive in and swim.

New poets came to the open mike; Tapiweh and Hansen from Zimbabwe read poems about being from there and here; Hasan from Cyprus read a poem about rain; Anwar and Gabriel, young Londoners, read poems on the theme of justice.

The highlight for me were the two young Americans who had crossed the water to join us: Micah Bournes and Chris Cambell. Their poems about the identity reminded me how in America, many citizens are born“ on the outside” and the fight to be heard is the wellspring of our democracy. The spoken word poems were powerful, playful, angry and full of hope — their energy lifted us like a wave.

In the chat afterwards, I asked Micah again about his sweatshirt.
“Can poetry really make a difference? I don’t know but there must be a reason poets are always the first to be locked up by authoritarian regimes.”

“They know how powerful we are,” he replied.

“Yes, they know even when we doubt it!”

We were only a couple of dozen people, in the basement of an old Victorian office building down a back alley away off the end of Covent Garden. The world outside continued on its way; the next day the election would bring some relief but no end to the march of the “Strong Man” in America, across the world. Yet as Shelley wrote, long after Ozymandias has disappeared into the desert sands, poems slip through, light as rain, powerful as a wave.