A little more than a year after joining the board of Exiled Writers Ink, and a few months after agreeing to Chair the board for the year, on March 29th, I attended the Bart Wolffe Poetry Award evening and was reminded of why this organization is so valuable and important for the London literary community. 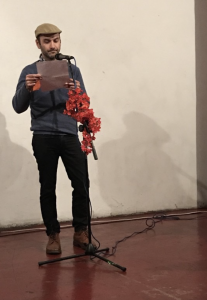 Half an hour early, I arrived at the lower ground floor auditorium of the Candid Café, to find EWI founder, Jennifer Langer and a few others already setting up. I’d first been introduced to this corner of the city tucked behind Angel station by a group of young writers from Amnesty and its atmosphere of inexpensive bohemia filled me with nostalgia for a London nearly lost during the boom years. The Cafe itself is cozy with a few sofas, wooden tables and large candles, but the auditorium was the size of a small theatre.

Shortly before 7, the audience started to arrive, soon filling up the seats as we finished putting out the snacks and drinks. While we gathered, Le Gazhikane Muzikante played songs from the Balkans and the Eastern Mediterranean, setting the tone for a celebrationof creativity across borders.

The evening — and the award — had only happened because of something very sad and something pretty wonderful. Bart Wolffe was a poet and actor from Zimbabwe who had been an active and engaged member of the EWI community; his last performance, a few days before he died, was at an Exiled Lit Café. A group of his friends and supporters funded a prize in this name, and it was this prize that had brought us all together on a rainy night in North London — judges, poets, audience members and enthusiasts — to celebrate the way poets can find their voices in all kinds of settings and through all sorts of displacements.

Before the awards, friends Sharon Malyan and Anne Bean spoke about their memories ofBart, describing his large-hearted, embracing personality, his creative spontaneity, and his way of making everyone feel equally welcome. At a turning point in the year — a day before Passover, a bit before Easter and after Nowruz, Sharon thought it might be in the spirit of Bart and EWI to break bread together after the event, and added chocolate eggs, and some Passover evocative snacks to our offerings.

I had never met the judges before, although both are long-standing supporters of EWI. Alev Adil is a performance artist, poet and scholar who specializes in the creative expressions of the post-Ottoman diaspora; Michael Zand is a poet and academic born in Iran whose most recent book from Shearsman Books, The Messier Objects, is a play on the name of Charles Messier, 18th century astronomer. Cosmopolitan, local, dislocated — they set the tone for the evening with their enthusiasm, perception and careful attention to the poems.

They both spoke about how much they had enjoyed reading the work, entering into and experiencing each poem in turn; how all had been worthwhile, but how in their discussions and exchange, three winners came through clearly — both for individual poems and for how their group of poems stood out. These were poems that commanded their attention the most.The third place winner read first, and I was delighted to recognise him as a young poet who had attended an EWI event I had organised for UK based Latin American writers. Lester Gomez Medina was born in Nicaragua and raised in Costa Rica; an MA student of translation, he read a poem entitled “When Shipwrecked” which was a poem about poetry, how words, images, build a home in dreams, one that becomes a bottle on the sea when life tumbles us into its waves.

The second place winner was Elena Croitoru; Croitoru was born in Romania but lives in Kent; she’s studying for an MSt in Creative Writing at Cambridge, and her writing has already found its way into literary journals here and in the US, where she was nominated for a Pushcart Prize. She read a poem which was one of a series about her grandfather  — another resonant poem about what anchors us, where we are rooted and what we take with us.