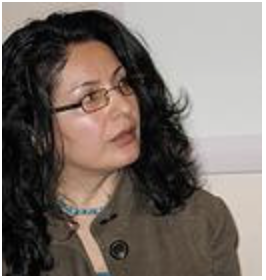 Nasrin Parvaz was born in Tehran. In post-revolutionary Iran she became a women’s and civil rights activist. She was arrested, tortured and spent eight years in prison; she was released in 1990. After her release, Nasrin resumed her activities and once again she found herself being followed by Islamic guards. Some of her friends were re-arrested and she realised she could no longer stay in Iran and she fled here to England, where she claimed asylum in 1993. She was granted refugee status a year later, and has since lived in London. She studied for a degree in Psychology and subsequently gained an MA in International Relations. She then completed a Postgraduate Diploma in Applied Systemic Theory and worked in a team of family therapists. Nasrin’s prison memoir was published in Farsi in 2002. A summary of her memoir was published in Feminist Review (number 73) in 2003; and it was published in Italian in 2006 by Effedue Edizioni. One of Nasrin’s short stories, A war against womanhood, won the Women’s World Award in 2003; in 2010, another was longlisted for the Bristol Short Story Prize and a third shortlisted for the Asham Award. Together with poet Hubert Moore, Nasrin has translated some poems, prohibited in Iran, from Farsi into English. They appear in the Modern Poetry in Translation series, and one, ‘Dear Fahimeh’, was republished in Fire in the Soul: 100 poems for human rights (New Internationalist, 2009). Two of her poems appeared in Over Land, Over Sea, Poems for those seeking refuge, published by Five Leaves, in 2015.

A War Against Womanhood

Last week I went to the Whittington Hospital in London. I waited in the reception room for my turn. A mother and her daughter were there waiting. Both of them were veiled and I saw my own childhood in this woman’s child.
It didn’t take long for the doctor to call the mother. She left her daughter sitting there and walked to the doctor’s room. The little girl seemed to be about seven. She took a mirror out of her small pretty bag and looked at her face. Looking in the mirror, she tried to push the veil away from her face, but it wasn’t so easy to do. She put the mirror in her bag. Suddenly, quietly, she took her scarf from her head. She squished it like a dirty handkerchief and pushed it into her bag.
It reminded me of my childhood. I was seven or eight years old when my mum forced me to go to school in a long veil. I was embarrassed. I couldn’t tell her that I didn’t like to go to school like that. I didn’t have anybody to turn to. So one day I came up with a plan. I decided to put my veil in my school bag as soon as I left the house, and to put it on again behind the door when I got home. For months I was a happy girl again. I was going to school like other girls, with my hair falling over my shoulders.
One day, as I was about to enter the house after school, I realised that the door was open. I thought that I wouldn’t need to take the veil out of my bag behind the door. I went into the courtyard and opened my school bag. I was just taking the veil out of my bag and putting it on my head when I saw that my mum was watching me. She couldn’t believe her eyes and at first she was speechless.
There was a fight between my mum and me. A long fight. A fight for power over my life. I didn’t give in. My father didn’t back my mum and he didn’t back me either. I just didn’t listen to my mum. And so I won.
Thereafter, I didn’t need to hide my veil. At that time, I didn’t know that one day a regime would come to power in Iran that would force me to wear the veil once more.
Years later, in Iran, to get rid of poverty and censorship, people stood up against the monarchy. To prevent this revolution from growing and getting out of hand, the West put pressure on the Shah and the Western media created enough propaganda to support the mullahs. The Islamic regime came to power in 1978 in order to crush the revolution. Their first strike against the revolution was a war against womanhood. First they got rid of all women judges. Then they announced the mandatory wearing of the veil. They introduced a rule which forbade women to work or to travel without the consent of their father or husband.
Though religion had always been closely interwoven with the law in Iran, it had never before chained women in this way. Now the mullahs made a prison for women—a prison the size of Iran. Women could not breathe, either inside or outside their houses. The country became a war zone for women. Women’s bodies became the symbol of evil. Their bodies had to be kept covered and separate from the holiness of men in public. Segregation became a habit.
It wasn’t only the Iranian regime that treated women as second-class citizens. Many other governments did the same. They called this Cultural Relativism. Western women have the right to live the way they want, but any woman who happens to be born in Iran, will have to comply with these medieval rules. What a racist and sexist world we live in!
However, women came out and spoke out. From the beginning, in Iran, many women stood up against such obvious inequality and began to fight for their rights. Many of these women were arrested. And I was among these many. We were executed, stoned, publicly lashed or imprisoned, but we did not give in. A few months ago, one of these women, a woman called Nosrat, pulled herself out of the grave that she had been placed in and escaped from a rain of stones. She is now in prison.
Penalty for not wearing the veil correctly is seventy-five lashes, but still women refuse to observe their hejab as the regime requires them to do. They disobey the rule. They say that they do not want this sexual apartheid. Now the women’s movement in Iran is one of the movements of which the regime is fearful. They are fighting against the regime and they have the support of other women all over the world.
Now that I am living here in London, I can see that the Iranian regime is not the only religious regime that tries to turn a country into a war zone against womanhood. Some women are doing the same to their daughters at home. Perhaps there are no governments in the world that care about little girls and respect their freedom? Or perhaps governments put the wellbeing of all children in the hands of their parents? But parents impose their own ideologies on their children; and especially on little girls.
I hope that the little girl I saw at the hospital will be able to fight her mother, long before she has internalised all the lies about her sexuality, the lies that her mother in turn has been told. Or perhaps we women of the world must put our hands together and demand the equality of all boys and girls, of all women and men, now and forever around the globe.