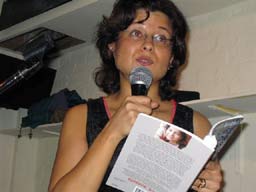 Choman Hardi was born in Sulaimanya, Southern Kurdistan in 1974 and grew up there. She has lived in Iran and Turkey before coming to England in 1993. She has published two collections of poetry in Kurdish: ‘Return with no memory’ (Denmark, 1996) and ‘Light of the shadows’ (Sweden, 1998). She is also an artist and has contributed to a number of joint exhibitions in Britain and across Europe. Choman is the chair of ‘Exiled Writers’ Ink which is an organisaiton consisting of established refugee writers who write in another language as well as English. The organisation aims to represent those writers whose voice has not been represented in the main stream British media. Choman studied philosophy and psychology at Queen’s College, Oxford and has an MA in philosophy from University College London. Currently she is a PhD candidate at the University of Kent at Canterbury, researching about refugee women and their mental health. Her father Ahmad Hardi, who also lives in London, is a very well-known and much respected Kurdish poet.

there is a place where it doesn’t rain continuously,
where you can sleep on the flat roofs on the hot evenings,
and it snows to let you know that another winter has arrived

There is a house with four bedrooms
where a couple live with their three children
one, is seven years old,
and the other two are three

There was a house with four bedrooms where seven people used to live,
And they ate around a flowery sufreh every day
and a young man used to play his flute until the women would cry
may be for what there was
or
for what there would be

there was a garden where the brown chicks would grow big enough to be killed
and every death was cried over,
where a lonely fish was swimming around a blue pot aimlessly,
and a little goat once spent a night

there was a place, before the marriages taking place,
before the mountains attracting the men,
before buying one-way tickets
there was a place where seven people lived happily in the four seasons
and a little girl who kept dreaming about chicks, goats and rabbits.