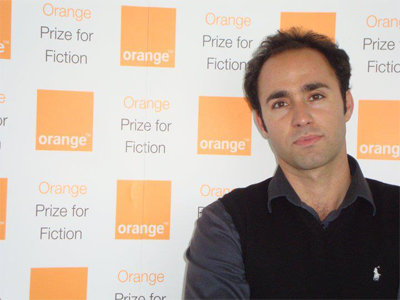 Navid Hamzavi is an award-wining Iranian writer. He is currently doing his MA on Cultural and Critical Studies at Birkbeck, University of London.

The first collection of hist stories,Rag-and-Bone man,was published in 2010, and was severely censored by the Ministry of Cultural and Islamic Guidance.

Having difficulties in publishing his stories, he recently came to London, he has been pursuing his career in writing and performing.He has given readings and performance at various festivals such as “East Finchley Art Festival” , “Hardy Tree Gallery” and “Exiled Writer Ink” and some of his stories appeared in English magazines such as”Ambit” and “Stand”.

Unofficial Report on Running an Election

I lost my girlfriend in the presidential election. It was dreadful: one of the candidates put an end to her life. Some events are so disconcerting that even the occurrence of other bizarre events cannot wipe them from the memory. How could I explain the image of pieces of my girlfriend’s flesh on the wall when the fortune-telling cards had anticipated differently? Indeed such an election result is unpredictable.

Candidate number 1 belongs to a right wing party. He is so far to the right that you need to stick your left cheek against the TV screen and stare into the far left side of it to be able to see him. The only visible part of him in his poster campaign is his right eye. Candidate number 1 is going to kill Candidate number 2 with his handgun.

Candidate number 2 is ultra-right. He placed a little bomb in one of his posters that would explode at a specific time. There was a warning below the poster to keep a safe distance, though. Nevertheless, my girlfriend was reduced to pieces of flesh while reading the poster. Such a wonderful poster campaign.

Candidate number 4 is an ultra left politician. He is a Sagittarian. He has covered the right side of his body with black oil paint. Nevertheless, he will be killed by Candidate number 1’s gun.

Candidate number 5 is also supported by the left wing. If you examine his posters, you will see anything leftist you could wish for. One even had a picture of a stark naked woman. He married a movie star three times and divorced her three times. What mayhem the press wreaked.

While speaking, Candidate number 1 banged his hand on the desk and let out such a wild holler that the TV picture started flickering. The pitch of his voice instilled fear in everybody’s heart.

Candidate number 4 hasn’t mastered the device of shrieking but his campaign advisors have come up with a genius idea to make some noise. They will hire a jazz band.

Candidate number 1 and Candidate number 2, sat side by side. The presenter was also there. The Sagittarian always looks great, because he is full of charm with lots of sex appeal. He knows exactly what to wear and how to project his looks in a flattering way. He loves public speaking and is very skilled in using abstract and intangible words. He steers the discussion to where there is nothing to discuss. A Sagittarian is warm, excitable, and restless. So he always uses his verbal skills in a way that will be noticed by the public. Regarding these qualities, if the discussion were to go on in this fashion the right wing’s votes will decline. To prevent this, during the debate Candidate number 1 produced his side gun from under the desk and shot three times at Candidate number 2 – two bullets in the chest and one in the face. What a heartrending scene.

Although there were no reliable statistics before the election, the latest polls suggested that the left wing was in the lead. Still, the outcome predicted by fortune-telling cards was likely and the presidential election among the four remaining candidates seemed easy as pie. But this didn’t come to pass.

In spite of the enormous size of the right wing campaign, the left wing had not given up. Considering the fact that they had only one candidate left, they arranged periodic visits and a vast propaganda machine against the right wing to maintain their relative superiority in the polls. In this fierce competition, helped by the left wing’s slogan about restoring the Age of Dinosaurs, their votes shot up.

The right wing exerted their influence to give their rival the chance to be the first to take the podium. They performed this act of good will to alleviate the tension after that gruesome thing that had happened before the eyes of the audience in the previous debate. They had also intended to win more votes for themselves. However, they failed. After candidate number 5’s speech, the public firmly believed he would have a landslide victory. He said:

In the times that the firmament was so low that the people could reach up and touch it, a boy was born in the family of God – sent by Him. God commanded a spider to spin a thread for the Son of God to descend as the first man on Earth. He brought with him a fistful of dust. He poured it on the sea and there was Land, which is called Earth by its inhabitants. Generations have passed to give birth to another son whose descent goes back to God.

He has traversed from Madagascar to Malawi and then to Mount Kenya and to Sudan and .Mediterranean Sea. He is now a candidate who has never tasted power. His mission is to return people to the heavens once more.

A few days later when the support for candidate number 5 had moved beyond the nation and there was not even a dim hope of the right wing winning the election, it was candidate number 2’s turn. This speech would indeed make him the president.

Number 2 appeared before the TV cameras to sway the public opinion.

The asphalt on the street which leads to the TV station has been somewhat ruined. Two CF 170 tanks which escorted him, lent him an air of grandeur. Number 2 appeared before the TV cameras to prove that he was the only one willing to sacrifice himself for the people. So he serenely produced his handgun from behind his back and shot himself in the mouth. God bless his soul.