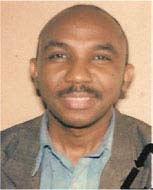 My name is Abdul-azeez Mohammed; I was born on 21st December 1956 in Keren town, in the then fourteenth province of imperial Ethiopia, now Eritrea. I received the first of my short-lived education at Government Primary School Keren. I had then proceeded to St, David secondary School where I studied for a period less than one year before I discontinued that owing to a host of circumstances.

My family comprising- four brothers, four sisters, the youngest of whom was by then under one year and my mother sought refuge in the northern part of the Sudan where I begun to work as a painter and occasionally as interpreter for tourist. I have travelled to a number of central and West African countries in the process of which I was able to study for a higher diploma in arts education and English language. I have staged a number of arts exhibitions for my painting mainly portraying themes of human conflicts with special emphasis on the three decades that characterised the repressive reign of Ethiopia in Eritrea. I also composed post-independence poetry, reflecting on internal conflicts, social justices, ethno-nationalism and the exodus of thousands of Eritreans out of Eritrea.

Since I came to live in London in 1991, I have staged three painting exhibitions under the auspices of the Horn Reflections that generated great interest from those who came to see it. Besides, I have deeply rooted interest in writing poetry as I always found it to be one of the most compatible medium through which I expressed my personal and general feelings. In deed poetry became more than a medium; to me poetry became an intense form of catharsis. All the poems I write stem from events that have left an engraving impression in my feeling. I therefore experienced profound relief whenever I composed one.

Since the poetry I write is based on actual events and always wished readers to share the core experiences, I always endeavoured to render expressional clarity without necessarily compromising the poetic qualities hence I adopted a narrative form of poetry. I recited poetry to numerous audiences in Africa and the United Kingdom. I was greatly encouraged by the response I had that I have now completed a poetic anthology comprising over 130 poems which I also illustrated and am writing a novel entitled ‘Paradisal Soil’ which is still in its initial stage.

Poems by abdul am

The misty night staggered drunk
When the nebulous moon lent laden lunacy
And no one seems to be safely laminated
My worth in the unforgiving revelations
Of urban scale-markers
That stretched high from the jewels
Of city slickers
Down to the indignity of rampant junk
That I
And in the darkness of urbanite eyes
read my image as a crank
thus I existed between the bubbling rhetoric
Of the sinking and sank
The night staggered,
And I levelled to the stillness
Of disenchanted monk
I exited the hauling hours of the city
And plunged into the surreal
Amid the colourful fuss of glass,
The infinite shaping of cement
And the sealed fate of steel
More distorted became I than me shadow
The palaver of passion I vacated off my heart
I dropped the horror of glandular alchemy
With all its temporal pleasures and cacophony
Freed me heart and soul
Thus, I was in a planet but alone
Unaffected by the flame of desire
Sidetracked the gaudy rose flowers
As they wallowed in folly of fragrance and colour
And of the darkness of loathing
That I deposit back to the originator’s tank
Let my iris be a free lodge for the grandeur of beauty
And to the down drop of incurable ugliness
I have no eye
So, alertly I think
And I was drunk
Staggering drunk
That clear in the night I rank,
Even more than tarnished wine cask
But more
For I sipped from the wine of wakefulness
That brewed in the amnesia of vine gods
And in the crystal clarity of me stupor
I begun to weigh up and appraise cobwebbed chapters
Why I loved life-flame, sky?
Why levelled the blindness of id, that I `
But I knew the sun’s facial veil
was her brutal shine.