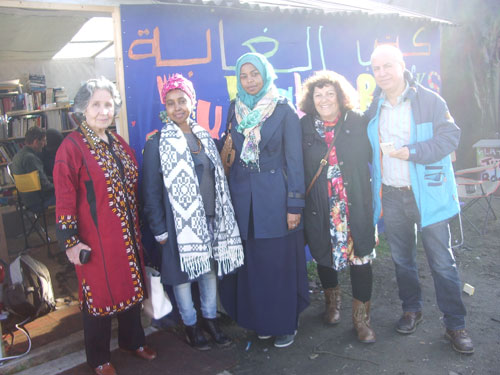 I gasp at my first sight of the so-called ‘Jungle’ camp which is of a sprawl of never-ending tents and of groups of young men walking aimlessly in squalid conditions. The 6,000 predominantly young male migrants originate from Syria, Afghanistan, Sudan and Eritrea with a few from Somalia. They have fled from horrific situations in their home countries and experienced further trauma on the way. Eritrea is ruled by an authoritarian regime with forced, indefinite conscription in place, Syria is utterly war-torn and conflict continues in Afghanistan. Despite all this, as in 1939, the British government is unwilling to accept significant numbers of refugees, even from Syria. The camp is divided into national quarters indicated by the respective flags. There are also about 350 women and 125 children. It is getting cold at night and I notice that some men are wearing only flip-flops. This is a refugee camp in 21st century France and I question how the camp has been allowed to fester.

I am in Calais with Exiled Writers Ink which comprises a large network of refugee and exiled writers. Mary Jones, who established the well-resourced and used Jungle library, has invited us to organise an afternoon of spoken word poetry and a workshop which take place in the new performance space attached to the library. Some strong Irish men are putting the finishing touches to the wooden structure and refugees periodically peep round the door to see what is happening and finally we have a good-sized audience. Spoken word poets, Fatima Hagi, Firdos Ali, Husam Eddin Mohammad, Selam Kidane and Shabibi Shah, from Somalia, Syria, Eritrea and Afghanistan respectively, perform their work in the main languages of the camp refugees and interact with them in a workshop. In addition, Somali born playwright, Firdos Ali and actor, Fatima Hagi, perform a short play in a mixture of Somali and English. We donate poetry and prose books in their languages to the refugees who had expressed a need for such books. Exiled Writers Ink is also grateful to the Poetry Translation Centre for donating their dual language literary texts.

The spoken word poets from Syria, Afghanistan, Eritrea and Somalia share the migrants’ languages and before performing their poetry, explain how they themselves came as refugees to the UK in an earlier era. The Arabic speaking audience members laugh on hearing a poem by Hussam and then appear particularly moved on hearing a poem which describes the pain of leaving his country and of life as a lost exile.

Andalucia of the Trains by Husam Eddin Mohammad

(written in Arabic and translated by the poet)

The mothers will save us from the whale
They will pull us from the placenta’s milk
From the umbilical cord
We float on the water, hungry
Puzzled and naked

We shall tell how we crossed the Aegean Sea
And were lost like Ulysses
How we travelled the sea to a jungle in France
And the rescuers surrounded us with barbed wire and presents
We said peace upon a tent in Vienna
A river in Berlin
Peace upon the refugees
Peace upon a homeland that we borrow till the end of days
To an exile as broad as the diaspora’s length
Peace on the Andalucia of trains.

Then after everyone has performed their poetry, I talk about the five senses and pass round various items including some rosemary to smell and orange slices to taste and everyone writes one or two lines about experiences and the senses connected to their memories and finally we have one collaborative poem. Mohammad from Sudan stands up and recites many beautiful poems he has written, some of which are about the passion and pain of past love. However, we struggle to hear his words as French police helicopters whirr loudly overhead. Yet, I become aware that poetry and memory helps sustain some people in the difficult emotional and physical circumstances in which they find themselves.

At the Calais camp, the so-called ‘Jungle’ mired in mud, the French authorities provide very limited basic utilities in the form of standpipes, mobile toilets and lighting along the main route through the camp. In early November 2015, a Lille judge ordered that the camp be improved to prevent serious human rights violations. Nonetheless, it is apparent that the refugees are unwelcome and unsupported by the French authorities and furthermore, are under intense French security police surveillance. Predominantly British volunteers provide services, such as English classes and assistance with building shelter and facilities. Indeed, the day after our workshop, I give one-to-one lessons in English to various Sudanese refugees and other English volunteers are doing likewise. Meanwhile, Stanley helps some Sudanese migrants collect firewood from the edge of the camp. Yet, the refugees themselves have constructed wooden framed structures covered by plastic sheeting, such as the Jungle library, Eritrean church, restaurants and shops which they run themselves. We are overwhelmed by Afghan hospitality when our group is invited to eat in an Afghan ‘restaurant’ and as we perch high on wide benches in the packed, buzzing male space we imagine we are in Kabul.

Husam and Shabibi, two of the Exiled Writers Ink poets, gain further insight into the migrants’ dire situation. When Shabibi visits the Afghan community in the camp she returns deeply upset by their predicament which causes her to remember her own traumatic escape from Afghanistan. She had met a thirteen-year-old boy who cried as he related that he had been separated from his father on their journey and was unaware whether he was alive or dead. On seeing the state in which the children and teenagers had to live, Shabibi began to weep for them. A young man came by, hugged and kissed her forehead and she saw her son’s eyes in his. He attempted to comfort her “Mother, mother, don’t cry. God will help us somehow one day.” When Husam visits the Syrian section of the camp he is informed by the refugees there that Syrians from Daraa, the city that started the revolution, have established a separate community in the camp. The Syrian refugees, who all oppose the regime and are deeply concerned about the political situation in their homeland, share Husam’s pessimistic outlook about hopes for improvement in Syria. The length of time they have been in Calais ranges from a few days to eight months and they attempt to cross the border several times a day or night without success. One of them has a deep gash in his hand. Some Syrians inform Husam that they have applied for asylum in France or Germany but that they still consider it worthwhile attempting to cross the border to the UK.

The Calais camp acts as a base for refugees’ multiple, dangerous attempts to reach the UK clandestinely by lorry, train or ferry. Some refugees informed me that they therefore avoided having their fingerprints taken or seeking asylum in the countries in which they first entered the EU although the Dublin Convention allocates responsibility to the state in which an asylum seeker first enters the European Union. However, many Sudanese are awaiting the results of their asylum claims to settle in France and the French government is in the process of dispersing the refugees to various parts of France. Hence, there appears to be an element of choice in terms of the country in which the refugees claim asylum.

I am profoundly saddened and angry that the Calais migrants are denied their humanity and forced to survive in atrocious conditions in the ‘Jungle’ camp. While clothing and food have been generously donated and the clothing warehouse is full, we hope that we provided just a little food and escapism for the spirit and mind as poetry and words enhance the inner life. I am pleased that Mary has invited us back to run a workshop so that the migrants can ‘get creative’ again.

Do you ever sing now?
Those songs of your Syrian childhood
Remember the ecstasy of the rain rhythm
On the tired palm fronds,
You sing the songs so low here

Never did the air smell so damp, so mouldy
Cold seeps into your veins
Gets inside your bones
Salt wind blows in from the Channel
Sand gusts in from the wide beaches

Your Odyssean journey is virtuous
You survive on hope
Trapped and desperate you risk your lives
The tentacles of obsession cling to you
Nights of climbing the wire like spiders
To creep into chilling steel caverns
Over and under sealed silver trains
At all costs to reach that sceptred isle set in a silver sea.