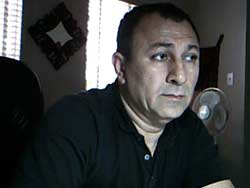 Saeed Tavakkol was born in Ahvaz , a city in southern Iran. He emigrated to the United States in 1983 a few years after the Iranian Revolution. His chaotic childhood, his participation in the revolution and the turmoil of the post revolutionary society engaged in a war, compelled him to write.
His life in the US as an immigrant and his personal experiences after September the 11th have greatly motivated him and inspired his creativity.

He published his first book “Confessions of a Writer” in 2005. He lives in Dallas and paints when he is not writing.

GIRL BEHIND THE WINDOW

She peered out the window. Everything was so different than where she grew up. The street below was overrun with the crowd – mostly young people. They gathered in small circles, passionately discussing issues among themselves. Some held signs, waving them furiously in the air. Heads moved back and forth and hands cut the air like knives. She had never seen people that angry—what could have made so many people so angry?

She could not read Farsi but recognized the curved letters with dots in their bellies like pregnant women with triplets. Letters with mouths half open, hungry enough to swallow the character sitting silently next to them. The sharp blades of other characters like the sickles peasants used to harvest, the letters she had seen in books her father read.

The warning from the Center for National Security and Public Safety, on the radio this morning echoed in her head, “Any gathering of three or more persons on streets is prohibited and illegal. Perpetrators will be arrested.” She could not imagine the number of buses required to haul all these felons to jail. If people back in America took to the streets so passionately like this, obesity would not be an issue. She grinned.

She sipped the hot Darjeeling tea her BeeBee, grandmother—whom she’d never met before today—had prepared for her. The young woman wasn’t sure if her shakiness resulted from jet lag or the crowd of cousins, aunts, and uncles vying for their first glimpse of her. On this, her first trip to her motherland she was overwhelmed by unending platters of food and constant kisses blanketing her cheeks and forehead. Her nostrils burned from Espand, the scented seed, grilled to prevent the evil eye.

Her mobile phone rang out the first few bars of “Yankee Doodle”. This was the first time it had rung in the three days since she left America. Enthusiastically, she pushed the talk button, “Hello?”

“Hello. My name is Peter Burton from Prudential Insurance. I hope my call has not disturbed you? ”

“Not at all. How interesting. I am thousands of miles away from home. I can’t believe I am receiving calls from America. What can I do for you?”

“It’s amazing how connected we are in the world.”

Outside, a uniformed officer snatched the pamphlets from a young man’s hands and threw them in a ditch. His actions agitated the crowd around him.

“I am calling to offer you the best life insurance at the lowest premium.”

A second officer approached the same young man from behind and quickly pounded him to the ground with the butt of his gun.

The young man coiled in agony. An old woman stood a few feet from the scene, watching them with her trembling hands clamped over her mouth.

“I need to ask you a few simple questions just to fill out the forms.”

A shot cracked the air. The crowd scattered in fear.

A line of soldiers flooded out of a military vehicle and took positions on the both sides of the street. Their helmets reflected the sharp rays of light into her eyes.

A running woman tripped as she was escaping the chaos. Her scarf fell to the sidewalk. Now she had broken the law by not wearing her Hejab in public. She knelt to retrieve it, but the explosion convinced her otherwise. She ran leaving her scarf and her right shoe behind to disappear under the feet of others.

“Are you currently a full time student?”

“Any demonstration is considered a threat to national security and perpetrators will be severely punished,” the words echoed in her ears.

The armed forces surrounded two young demonstrators. As others rushed to their rescue, the soldiers shoved them away. A military Jeep approached the circle and the uniformed officers wrestled the two men and a woman in their early twenties into the vehicle.

“No.” She shifted her glance from out the window to her sweating palm. She found herself wishing she did smoke.

Another Jeep plowed through the crowd. Soldiers leaped out taking positions on the sides of the street; their guns aimed at demonstrators.

“By not smoking, you have done yourself two favors. First you haven’t shortened your life. Second, you have drastically reduced your premium.”

She squinted through the window and noticed a soldier on the roof across the street aiming. She could hear her heart pounding. A young-looking woman, one who looked quite like herself, wandered around confused, lost in the crowd. More shots echoed across the buildings. People scattered. Some crowded into a sandwich shop, a few rushed into a bakery. Others ducked behind cars.

Apparently, everyone else knew what to do in a chaotic situation, but the young girls. Neither the girl in the street nor the one behind the window knew what to do, or even where she was. They didn’t understand the chaos, strangers lost in the pandemonium.

Another shot was fired.

“You are in the prime of your life.”

She collapsed. Everything turned gray except the growing red spot on the front of her shirt.

“Congratulations! You are qualified for the lowest cost life insurance.”

The young girl touched her heart; she now was drenched in blood.