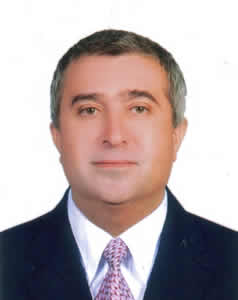 Kusay Hussein is from Baghdad, Iraq. As a fully qualified civil engineer he worked for the American and British authorities building hospitals and schools for the Iraqi people until he was kidnapped by an unknown military group for several months and had to seek asylum in Britain on his release. He has published many short stories in Iraqi magazines such as AFAK ARABIA and ALFA – BET.

When the sun occupies the heart of the sky in summer, like nowadays, it is not so easy to leave.
At that time of day, outdoor workers like me are compelled to look for any slithers of shadow that remain for use as shelter, even though they have all escaped. My eyelids used to close automatically to avoid the dazzling sunlight reflected on the sharp teeth of the new, America-made, barbed-wire which squats on the top of the old corroded mesh fence from Saddam days.

Every day, at such times of work, I remember that I must bring my sun glasses next time to avoid getting back memories of the pain that I felt before when I fell on wires like those (barbed or concertina wires) on one of my visits to an American base to find work. At such times, and especially when my young manager is in his office watching the site from his large, clean window, I have to show more activity in giving guidance to the concrete casting Iraqi workers. I hope to become a permanent employee in the near future instead of temporary because this company would allow permanent employees to stay over night.
The land which was given to this company by the US authorities is much bigger than the lands given to other companies working inside Baghdad International Airport, which is part of an American base called Camp Victory.

Salt spots started to appear on my shirt sleeves (because of sweat evaporation) when the manager sent one of his servants to request my presence. The shock of the cold air currents flowing along the corridor that leads to the manager’s office have their own way of convincing my body to stop crying. Gesturing with his hand, the manager asked me to sit then turned to his laptop. When he turned again to me after his little show of being always busy, he said: I want this concrete structure to be finished today even if you and your workers are delayed by 1 or 2 hours and for goodness sake don’t start talking about danger. We are all in the same situation. I didn’t answer him, not because I know he is a huge liar, but because I really need a safe home here even if it is temporary. Delay in leaving is dangerous.

The sun was still fighting to stay on its throne when I stood in line with the other Iraqi workers to replace the electronic IDs with our Iraqi ones. Then we had to walk a long way to reach the main road. I looked at the long line that the Iraqi workers were forming with their tired bodies. The line was parallel to the long line of the concrete barriers forming no. 11. I thought that the soldiers who were resting in their steel cabins on top of the observation towers could clearly see this.

When I reached the main road I was struggling to find a solution to another equation, how to reach home, which is even more difficult than the equation of our new American friends who always seem suspicious of our friendship. Unlike other days I didn’t find the small number of minibuses that used to wait for the workers at that time of day, but I wasn’t surprised when I saw the same long line of tired workers walking to AKARKUF roundabout where the nearest civilian traffic could be seen. I hadn’t walked more than fifty meters when the earth started to shake under my feet as if there was an earthquake. Then a blast of dust hit my face.

I started to run back towards the base again with the other workers, checking my body with my hands for any unexpected injuries. Behind the barriers we gathered ourselves, sitting randomly while the dust started to diminish. We saw each other’s dusty heads and tired faces, as if we had grown older by thirty years.

When we heard the crying and yelling of the injured I don’t really know why I thought that the time had come to think seriously about not forgetting to buy new sunglasses.