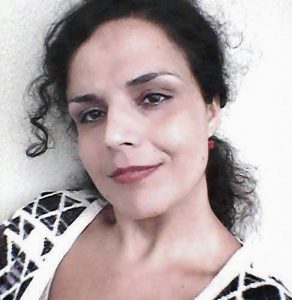 Dr. Hiva Panahi was born in 1980 in Sanandaj, Kurdistan, in today’s Iran. Her first poem appeared in the Kurdish magazine, Serwe, when she was thirteen. At age sixteen she started a movement against the Iranian theocratic oppression towards women, for which she was imprisoned and tortured.

In the 2000, she was given a scholarship to study Greek language and culture at the Univercity of Athens, Greece. She then she studied Political and Social Sciences at Panteion University of Athens where she received her doctorate. She has translated Aeschylus’ Prometheus Bound, Aristotel’s Politics, and Susan Dunne’s Interviewing for Writers and Researchers into the Kurdish language. A collection of her poetry, Secrets of the Snow, was published in 2001 in Kurdish and in 2008 in the Greek language. In 2011, Dr. Panahi received the honorary award for poetry at the International Festival of Storytelling in Kozani, and in 2014 was invited to take part in the Tinos Literary International Festival. She was a Assistant Professor with a renowned Greek Professor Neoklis Sarris and helper – family friends of famous Greek thinker and poet Nanos Valaoritis.

Professor emeritus of San Francisco, State University of the U.S Valaoritis wrote about Dr. Panahi’s poetry” With an exceptional lyrical subtlety and gentleness, she transforms tremendous pain and loss into a depth of feeling for humanity and nature, the true essence of love, and the faint rays of hope in the horizon. This volume is the debut English translation of her celebrated work. Hiva belongs to the great Medes tradition; the intense nuances of powerful feelings come from her Kurdish origin and dramatically color her poetry.
Dr. Panahi now lives and working in NYC

A poet has been murdered by Hiva Panahi