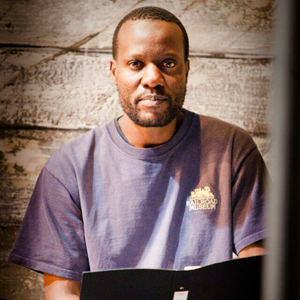 Hasani is a writer from Zimbabwe who left his native country due to political strife. He writes poetry and short stories and advocates for the recognition of human rights and justice in Zimbabwe. He currently lives in London. He is a member of the Freedom from Torture’s Write to Life, a creative writing group based in London, and is also a member of Exiled Writers Ink. The story ‘A life away from the Asylum’ appeared in the online magazine called the Five Dials issue 29

A life away from the asylum

Up here by the window, Brixton library, daydreaming. Before me an accounting textbook, open at another difficult chapter: ‘Accounting for Overheads’. I can only see little squiggles on white paper. I cannot concentrate because my mind is back home, in another era. An era when the whole country was like one huge asylum, and everything was going wrong. When we lived in darkness, and just switching on an electric light required an Act of God

From here, I can see some school kids in rows with their teachers at the traffic light, waiting for the green man so they can cross Effra Road. They are coming from the Ritzy cinema just next door, maybe having watched Victor Hugo’s Les Misérables, with the sad story of Jean Valjean stamped on their memories. The orderly crocodile! It reminds me of the queues. It takes me home again, to the asylum. Queues of people snaking for miles, and not neatly like the children down there. Those kids have their teachers to keep them in line. In the asylum we did not have such orderly queues to buy a packet of sugar, or bread, or to withdraw useless paper which we called money from the ATMs.

Instead of teachers, we had soldiers, the police, and the militia, which we called green bombers. They used the excuse of keeping order but were in fact jumping the queue to buy the same basics, no luxuries. Sometimes we did not know what we queued for. We always made it a point to join any queue and ask later what it was for, and most of the time, halfway through, sugar queues would turn into rice queues or ice cream queues or towel queues. It was worth staying, if only for the chance to barter what you eventually got for what you actually needed. A race to rid oneself of the useless paper we called money before it turned into toilet paper. Most of the time supermarkets would be so empty you might have thought they sold shelves.

The kids are now crossing Effra Road. Thank God they have road rules here and electricity. I can see cars behind the bold white lines waiting for the kids to cross . . . and red buses. I can only remember one red bus in the asylum, which was confiscated by the authorities during the election campaign period. One aspiring candidate was using it for campaigning, and it attracted a lot of people. The red bus enraged the authorities like the matador’s cloak enrages the Spanish bull, and they impounded it for good. There are no more red buses in the asylum, only small vans. The vans were designed to carry fifteen people, but in the asylum they carry twenty or more. The vans are just like the churches, which always have room for one more, or London pubs, which don’t close their doors to anybody. In the asylum those vans do not wait for kids to cross the road at the zebra crossing or at traffic lights. The traffic lights are useless poles because there is no electricity for them. The kids there wait for the vans to pass or they will get run over.

A siren wails down the road towards them. London is full of sirens. They’re busy rounding up those of us who escaped from the asylum, only to find ourselves asylum seekers – along with all the other ‘illegal immigrants’ I read about; people without papers, just like Jean Valjean.

Maybe it’s the Metropolitan police racing down Brixton Road to arrest an illegal immigrant, or an ambulance taking an illegal immigrant to an NHS hospital, maybe King’s College, or the fire brigade rushing to put out a fire caused by an illegal immigrant. The immigrants have been in the news of late, their number ‘three times more than the population of Newcastle!’, according to one newspaper headline.

In the asylum, if you hear a siren you’d better behave else you’ll be in the soup. Don’t wave at a motorcade, lest you be arrested ‘for undermining the president’. The only siren in the asylum is that of the presidential motorcade. The presidential car is like a queen bee in flight, protected by stern-faced men with dark glasses, ready to start a war with poor civilians queueing for anything. Ambulances are long gone, and you carry your sick in wheelbarrows if you can’t afford to hire a taxi. As for the fire engines . . . if their water tanks are as porous as sieves, I doubt their sirens work.

‘So, Blair, keep your England and let me keep my Zimbabwe,’ said Robert one day at an international environment conference. Blair managed to keep his England for ten years and Bob has kept his Zimbabwe for thirty-three years. Is that not the reason I left the asylum and find myself seeking asylum in this cold country? Sitting up here in the library with this accounting textbook before me, I can see why I am just an overhead.