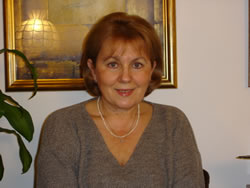 Darija Stojnic was born in Sarajevo, Bosnia and lived there until the out break of war in 1992. She worked as a lawyer/manager in the General Office of the Radio TV Sarajevo. She lives in London since March 1993. Darija writes short stories. She works as a counsellor for the Minster Centre and the Mapesbury Clinic in London and as a journalist for the Bosnian Paper edited in Norway. Her stories were published in three books, and magazines in London. She is finalising her first book of short stories about her life as a refugee in London. She is a committee member of the EWR.

The Occupation
(Translated from Bosnian by Branka Danon)

Even in her late years, my grandma Dragica, was a beautiful woman. Her thick black hair, her big piercing green eyes and her stiff upright posture elicited a strange respect. She did not talk much, she did not laugh. She used to work in the house round the clock. I can hardly remember her ever sitting. She was well educated and uncompromising, sharp and acidic in her dealings, especially with the women from the neighbourhood. For me she had a soft spot.

This Grandma of mine divided her life into two parts: Before the Occupation and after. Like her, this division was rough and bitter. Quite often, almost daily, whenever making comparisons, all the pleasant and good things took place before the Occupation. I was a little girl at that time and was confused by the word Occupation. I could not understand what it meant. I could not even pronounce it properly and would ask my Grandma time and again: “What does occupation mean?” In response to all my chatter and questioning, she would just wave her hand and talk to herself; “God forbid that such a thing should happen to anybody ever again”.

Later I learnt that Occupation actually meant The War, but even then it was not clear to me why she didn’t simply say – before and after the war, as this was easier to understand and sounded less pathetic. It never occurred to me that the time would come when these things would explain themselves.

Memories of my childhood and my Grandma’s house are a strange mixture of the magic of childhood and reality. I felt wonderfully well, warm and protected in her house full of aromas. She was constantly cooking or sewing. It was the peak of my happiness when, while baking bread or something, she would give me a piece of dough to make my own product, or when she would let me comb her hair. Nevertheless, I have still not forgotten the shock I would experience from the cockroaches behind the settee in the kitchen, nor have I forgotten the famous “icy” room in which the dampness rising halfway up the walls and window panes would freeze and remain frozen all through the winter. Nor the “horror” when I had to leave the warm kitchen in order to go to the freezing cold bed in the “icy” room. It makes me shiver even to think of it now.

At the same time, when the two of us lived together, I did not think of these strange things, of her unusual behaviour, of her long periods of silence. To put it simply, I was too small to understand why, but not too small to notice that it was hard for my grandma to live every day of her life. I paid no special attention to the thick old carpet which was carefully rolled up and placed on top of a wardrobe, or to the old chairs covered with cloth and put away in a corner, not to be used. I also remember the old never-used crystal glasses. They were kept in the kitchen cupboard to be taken out only for dusting. And the photographs, when they come to mind; some of them in albums bound in thick leather and some in frames. On each of them an extraordinarily beautiful and happily smiling Dubrovnik lady with her handsome husband and two sons. It never crossed my mind that all these “precious” objects were from before the Occupation, and that they were the only things my Grandma had left from a life she had led some place else, some time before.

I have learnt that my Grandpa was killed during the war and that my Grandma was left with two children. That she had to sew for people she never knew before, in order to provide for her children. But I could not envisage this other life of my Grandma’s nor could I comprehend it clearly.

I did not understand her comparisons, nor the division of her life into these two periods and it was my firm opinion that we were lacking nothing. When we got our new flat it was not clear to me why she dragged all these old things with her. The carpet was old and too big, the chairs were not appropriate and the glasses were nothing but glasses.

Grandma died in 1972, as bitter and unhappy as she had been during this part of her life. Later, the Sarajevo War happened. Ugly and disgusting. Occupation happened to me. And as if everything was repeating itself, another generation has started living on its memories and irrational comparisons.