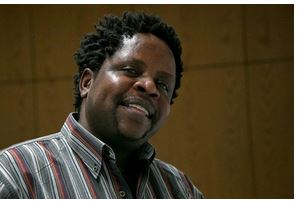 Christopher Mlalazi is a renowned novelist, playwright and poet from Zimbabwe. He is the author of the novels Many Rivers (2009), Running With Mother(2012) – translated into Italian and German – They are Coming (2014), and the story collection Dancing With Life: Tales From the Township (2008), for which he was awarded the Best First Book Prize in the National Arts Merit Awards in Zimbabwe.

Mlalazi has written and presented on stage in Zimbabwe eight plays, including the co-authored The Crocodile of Zambezi, winner of the 2008 Oxfam/Novib PEN Freedom of Expression Award, and Election Day, which won the National Arts Merit Award for Outstanding Theatrical Production in 2010. His poems and stories have been published in print and digitally, including the Caine Prize-  anthology titled The Obituary Tango (2006) and The Literary Review, published in the United States.

Currently, Mlalazi is working on two projects: a trilogy of plays entitled The Election Day Trilogy, which is a satire of the electoral process in an imaginary African country, and a novel tentatively titled Blade Maker, which, part mythological and part historical, is told in the form of African folklore.

From 2013 to 2015 Mlalazi was invited as a fellow of the House of Literature in Hannover, in Germany, a period in which he finished his last published novel, They are Coming, and toured several German cities doing readings and giving lectures at universities and events literature for his novel Running With Mother.

In 2008 the play that Mlalazi co-authored, The Crocodile Of Zambezi was banned by members of the state secret agents because of its political content, and this was after they had abducted and tortured its production manager just before the second performance, whom they wanted to reveal the addresses of the writers, but something he did not do.  The writers had to keep a low profile in the country for some time. In 2012 Mlalazi published his novel, Running With Mother, which talks about the government initiated Gukurahundi massacres of 1982-1987 in Zimbabwe and just after the country had achieved independence from colonial rule. After the novel was published, a newspaper which the ruling part uses for propaganda,  The Patriot  Newspaper, began running a series of stories purporting to be reviews of Mlalazi’s books, but which were accusing him of being ‘sent by western powers to collect evidence against the President so that he could be prosecuted by the ICC’.

Where will they be on Xmas day?

As our children stare wide eyed
at glass cases of sweets
that their poor fathers
can no longer afford to buy for them
to sweeten their Xmas days –
where will the shefs* be on that day?

and their husbands their crotches

between their perforated trouser legs