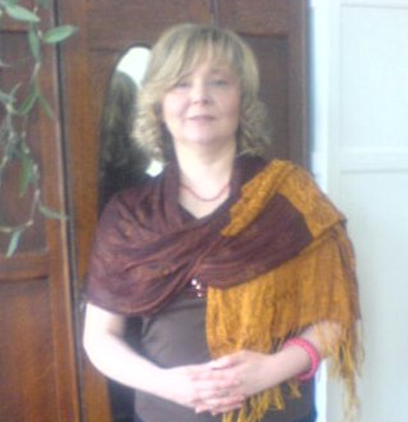 Anna Maria Mickiewicz – a Polish born author living in Great Britain. She received her Master of Arts degree in 1984 from Maria Curie-Skłodowska University. She also obtained a certificate in Media Studies from Birkbeck College.
As a student, she was involved in a democractic and civil rights movement in Poland. She was one of the editors of the civil rights independent magazine Wywrotowiec (The Rebel).
After moving to England, she worked as a London correspondent covering literary and cultural issues for the Polish press and radio, both in Poland and abroad: Wprost in Poland, Dziennik Polski in London, Nowy Dziennik in New York.
Since 2003, she has been a member of The Union of Polish Writers Abroad and editor of the annual literary magazine of the association, Pamiętnik Literacki – London.
Her first anthology of poetry, entitled Dziewanna (The Mullein) was published in 1984 by an independent (underground) publisher in Poland. Her second poetry volume, Proscenium will be published in August 2010.
She has published poetry, short stories and critical essays in the literary magazines: Akant, Obyczaje, Quo Vadis, Pamiętnik Literacki, Kritya poetry on-line. Recently her poem has been published in the USA in the anthology Chopin with Cherries.
A Tribute in Verse. She has also translated British and American poetry and drama.
In 2000 the author’s selection of short stories and articles Okruchy z Okragłego Stołu (Crumbs from the Round Table) was published by Norbertinum in Poland. She contributed to an academic literary publication: Proza polska na obczyźnie. Problemy-Dyskusje-Uzupełnienia (Polish Prose in Exile) dedicated to Polish migrants’ literature (published by the University of Rzeszów in Poland). The second edition is in progress.

By the refuse containers, an old woman.

From a distance you can see her diminutive figure, summer lacing shoes, flowing dress with collar, on her head a pink steelon headscarf.

She positions a plastic pail upside down, jumps about on it like a child.

She sinks up to her waist in the refuse, searching deeper and deeper.

She capsizes the container by force, throwing out bags, scraps of material.

She hangs on the metal lips of its green jaws, keeping her balance by waggling her legs. Net shopping bags on the tarmac.

A blond with a little dog looks on, she wants to go up and investigate, take a peek, check what’s in the shopping bags.

She looks around. People are returning from work.

You can’t just go up and pry.

The old woman loses her balance, a vigorous movement of the legs doesn’t help.

She clings on the pail, sways.

She regains her original position, carefully puts her feet down, jumps out,
puts the black bags into the pail,
and the rest into a shopping bag with the logo Boss.

She leaves briskly, looking ahead of her.

The tired lawnmowers wheeze in the sweat of their brow with what’s left of their strength.

The sun, its yellowy red rays at full force, decides to dim their glare.

Today
His statue is silent in Manchester
A frail figure
Is it longing for music or for the homeland?

Until later
Other fingers of another musician
In exile