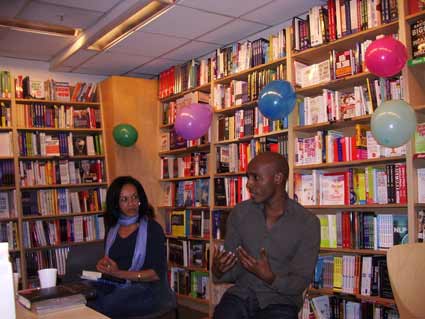 Eleni Cay is a Slovakian-born published poet living in Manchester. Her first collection, A butterfly’s tremblings in the digital age (which is written in Slovakian), was published in 2013, after she won a national poetry competition in her native country Slovakia. Eleni’s English language poems were published in two pamphlets -Colours of the Swan and Autumn Dedications-and featured in MK Calling 2013 & 2015, anthologies (e.g., Mother’s Milk); poetry magazines (e.g., Envoi) and as the ‘best poetry videos on the web’ (Moving Poems). Eleni is currently studying the MA Creative Writing at Manchester Metropolitan University.

Navid Hamzavi is an award-wining Iranian writer. He is currently doing his MA on Cultural and Critical Studies at Birkbeck, University of London. The first collection of his stories,”Rag-and-Bone man”, was published in 2010, and was severely censored by the Ministry of Cultural and Islamic Guidance. Having difficulties in publishing his stories, he recently came to London, he has been pursuing his career in writing and performing. He has given readings and performance at various festivals such as “Brighton Festival” , “Hardy Tree Gallery” and “Exiled Writer Ink” and some of his stories appeared in English magazines such as”Ambit”, “Stand” and “Critical Muslim”.

Suhrab Sirat is a poet, writer and journalist. He was born in 1990, in Balkh Province of Afghanistan. His first collections of poems were published by Balkh Independent Writers Association published by Afghan PEN, a member of International PEN. He is literature prize winner of the United Nation Assistance Mission in Afghanistan (UNAMA) for Women Rights 2009, and the first prize winner for Qand-e-Parsi, 2011, a prestigious literature organization in Persian speaking countries. Suhrab has also written the first lyrics for the first Afghan female rapper criticizing patriarchy and taboos. He has represented Afghanistan at the Rio International Literary Festival (FLUPP) in 2013. Apart from his activities and achievement in literature, he has extensive experience working with prominent media networks such as BBC in Afghanistan.born in Afghanistan

Edin Suljic grew up in the multicultural, multinational society of former Yugoslavia, before moving to the UK at the onset of the tragic Yugoslavian war in 1991. Being of a diverse background, he has a personal inclination to making different parts of society understand each other to find common values. He likes a good story; telling and making stories about people in all their diversities is the best way of bringing people closer together. Edin Lives and works in London

Shamim Azad is the most known Bengali poet in England. She has published more than 30 books including novels, short stories and poetry in English and Bengali. She is the first poet of Bangladeshi origin ever to have performed in the prestigious Edinburgh Fringe (2011) and worked for cultural Olympiad 2012. She is currently working on a new Arts Council funded project called Bards without Borders – where migrant and refugee poets respond to Shakespeare.

Workshop for Refugee Week 2015 in collaboration with the Wiener Library, Russell Square, facilitated by Lynette Craig. The title of the workshop was ‘First Impressions’, discussing the experiences of refugees and their first impressions of arriving in the UK. The resources of the Wiener Library were used to create stories.

We invite refugees, asylum seekers and migrants to register

Exiled Writers Ink in partnership with the Wiener Library
www.exiledwriters.co.uk

Free Workshop for Refugee Week 2013
Exiled Writers Ink present
Free workshop for Refugee Week for refugees and exiles
“I’m not going back.”
A writing workshop based on what a refugee sees, thinks and feels on arrival in the UK. We shall use the resources of The Wiener Library to create stories and poems which convey what it is like to be an ‘alien’ landed in a new place, not yet, nor perhaps never to be, called ‘home.’
Tutor Lynette Craig MPhil Cert Ed LGSM
Thursday 20th June 2013
2pm – 5pm
The Wiener Library
29 Russell Square, London WC1B 5DP
(nearest tube station: Russell Square or Goodge Street)
Refreshments
Register Now! jennifer@exiledwriters.fsnet.co.uk

Discover and develop your poetry writing skills with Choman Hardi. Born in Kurdistan and raised in Iraq and Iran, Choman is an experienced poet, teacher and academic researcher. To explore her publications and work please click here

Please note: These free workshops are for refugees and asylum seekers only.

Places are limited to 12 per workshop.

FOR REFUGEE WEEK EXILED WRITERS INK IN COLLABORATION WITH THE MEDICAL FOUNDATION FOR VICTIMS OF TORTURE PRESENT:

Monday 9th June: Hamid Ismailov – The Railway, translated by Robert Chandler, published Vintage, 2007
Hamid Ismailov is an Uzbek journalist and writer who was forced to flee Uzbekistan in 1992. His works are banned in Uzbekistan. He has published numerous books in Uzbek, Russian, French, German, Turkish and other languages.

Wednesday 11th June: Yang Lian – RIDING PISCES: POEMS FROM FIVE COLLECTIONS, pub Shearsman, June 2008
After the Tiananmen Square massacre, Yang Lian became a poet of exile in New Zealand and Australia. He is one of China’s most prominent poets. 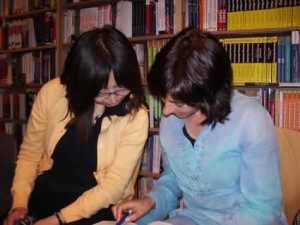 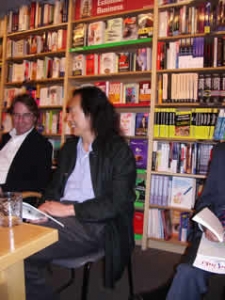 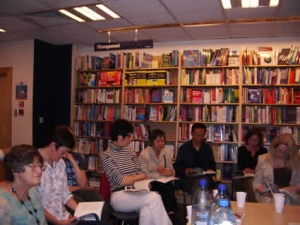 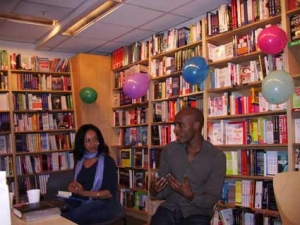 Thursday 19th June: Sulaiman Addonia – The Consequences of Love, Chatto and Windus, July 2008
This is his debut novel. Sulaiman Addonia is a writer and academic who lived in Sudan and Saudi Arabia before coming to the UK in 1990 as an Eritrean rugee.

Gillian Slovo
South African born Gillian Slovo is the author of ten novels as well as a family memoir, Every Secret Thing. Her novels include Red Dust, winner of the RFI Temoin du Monde prize which has also been made into a film, and Ice Road which was shortlisted for the Orange Prize. Her new novel, to be published in 2008, is about what it is to be a foreigner in Britain.

Faziry Mafutala, born in the Democratic Republic of Congo
He has lived in the UK since 1996, having had to flee becasue he was under threat. This arose as a result of becoming involved in the political activities of the main opposition party whilst working at the Ministry of Education in DRC. His poetry is inspired by the story-telling tradition.

The biographer of Jean Rhys and Primo Levi. She is working on a new book, and writing and translating refugees’ and asylum seekers’ stories.

An Evening For Refugee Week

Exiled Writers Ink invites you to an evening of the senses for refugee week:

Forced To Leave
Poetry and music with eritrean restaurant dinner 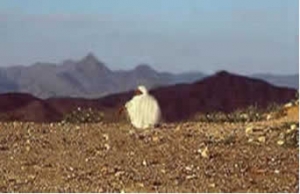 Mahmood Jamal launching his latest collection ‘Sugar-Coated Pill’. His other books include Modern Urdu Poetry and Silence Inside a Gun’s Mouth. He is a progressive poet, filmmaker and translator who writes in Urdu and English. He has been published in a wide range of anthologies, had his work broadcast on radio and TV, and been translated into several languages.

Alfredo Cordal (Chile) is a performance poet and playwright. He has written The Last Judgement, The Investiture of El Dorado, Smoking Mirror and A Passion in Buenos Aires. His poetry has appeared in a range of publications.

Amna Dumpor (Bosnia): left Mostar in 1992. Her collection of poetry is entitled Tears in the Heart

Tickets must be booked in advance!

ACROSS THE DIVIDE PROJECT

ON THE FRONT LINE