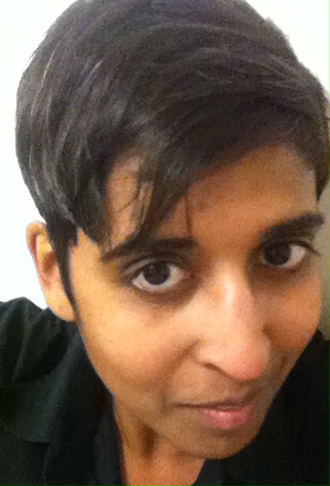 Saradha is a London born poet of Mauritian descent. She was awarded the Pacuare Nature Reserve Laureateship in 2015 and received an Eric Gregory Award in 2004. She provides professional development for emerging and established writers and artists. She is currently writing a poetic inquiry into the depopulation of the Chagos Archipelago using a melange of political rhetoric, Kreol ​and song lyrics. Her publications include ‘Out Of Bounds’ (2012), ‘Red’ (2009), ‘The Forward Book of Poetry’ 2008, Oxford Poets 2007, ‘I Am Twenty People!’ (2008), ‘New Poetries IV’ (2007) and ‘This Little Stretch of Life’ (2006).

Guardians Of Culture, Tradition And The Stability Of The Home

Somewhere over the rainbow, way up high, there’s a land that I heard of, once in a lullaby
In her deepest sleep, Madam Lisette Talate returns to Chagos,
leaving the Mauritian slums, where so many continue to follow

her example, standing in protest against the lies and chaos
orchestrated by the officials, who claimed there were no

indigenous people on Diego Garcia, Peros Banhos,
none on the sibling islands of Salomon, Egmont, and so

the islands were ‘swept and sanitised’. An albatross
was spared, and the order given: ‘a few Man Fridays’ must go.

The slave ancestors who fished, loved and prayed across
the centuries, the generations who dried the copra, coco,

extracting oil from the kernel of the nut, even the boss
of the copra plantation struggled to see over the rainbow.

On the main island of Diego Garcia, the US base, Camp Justice
squats. The Chagossians are still chanting, Rann nu Diego

thirty, forty years later, fighting for the right to return. Their loss
is unimaginable, these guardians of the Chagos Archipelago.

She circles me with her Portuguese compass
and settles just long enough to quench her thirst.
She discards my Arabian name Dina Arobi,
and calls me Cerné, from island of the swans.

With the hunger of a thousand Dutch sailors
and a tongue as rough as a sea biscuit she stakes
a longer claim and makes herself comfy,
bringing her own Javanese deer, pigs and chickens.

Defending her lust for breasts and thighs, she blames
the ship’s rats for sucking the Dodo from its shell.
Looking past my ebony limbs, she sees carved boxes
and marron hands at work stripping my forests.

She renames me in honour of Prince Maurice
of Nassau. A good choice, sure to scare off pirates
keen to catch a bite of river shrimp, flamed in rum.
Disheartened by cyclones and rat bites, she departs.

For eleven years, I belong to no one. I sleep
to the purring of turtledoves. Sheltered by a circle
of coral reef, my oval shape rises
from the coast up to the peaks of mountains.

A westerly wind carries her back. She unbuttons
her blue naval jacket slowly and takes me.
I am her Île de France, her petit pain.
She brings spaniels. She captures marrons

who are pinned down and flogged, each time they run.
She takes her fill in Port Louis, shipping casks
of pure sweetness to the tea-drinking ladies of Europe.
Young Baudelaire jumps ship on his way to India.

His step-father wants to cure him of ‘literature’.
Once a poet makes his mark, no tide can wash away
his words: ‘Au pays parfumé que le soleil caresse’.
And what can I say, he was so delicious!

Sadly sweet Baudelaire soon finds himself
in such a profound melancholy,
after seeing a whipping in the main square,
after two weeks, he sails to France, leaving me

a sonnet. With the pride and jealousy of
the British Admiralty she punishes me
with her passion for corsets, sea-blockades
and endless petticoats wide as the Empire.

The oldest profession is alive and thrives
in my harbours; strumpets and exports, cross-
dressing captains and girls in white breeches.
Boys who like boys who like collars and chains.

She brings a pantomime cast of malabars
and lascars to my shores. Their passage back
to India guaranteed, if only they can read the scripts.
The cane breaks backs. Tamil, Urdu, Hindi, cling

to their skins like beads of sweat. Hundreds of tongues
parched like the mouths of sweet-hearts in an arranged
ceremony. She is kind and ruthless and insists
on the Queen’s English. At night Creole verve slips in

and makes mischief. Each time she comes she pretends
it’s the first time she has landed here, but she soon
becomes bored. Tired of flogging and kicking
the dogs. She doesn’t know which uniform to wear.

‘I’m no one and everyone’, she complains.
‘And you have no more distinguishing marks
left to conquer, Saloman, Peros Banhos,
Diego Garcia…’ She pulls down her Union
Jack, it falls like a sari, around her bare feet.

—
Authors note:
Marrons: Creole name given to the slaves taken from Madagascar and transported convicts. Malabars and Lascars: Hindu and Muslim indentured labourers. These names are disparaging terms in Mauritian Creole.

The Saloman Islands, the Peros Banhos Atol and Diego Garcia were the ancestral homelands for the Chagos Islanders. The UK Government surreptitiously excised the Chagos Archipelago from colonial Mauritius during the negotiations for Mauritian Independence and created the British Indian Ocean Territory (BIOT) forcibly removing the Chagossians between 1965 and 1973. In I966 the UK Government made Diego Garcia available to the US Government to build a strategic military base, which was named Camp Justice.