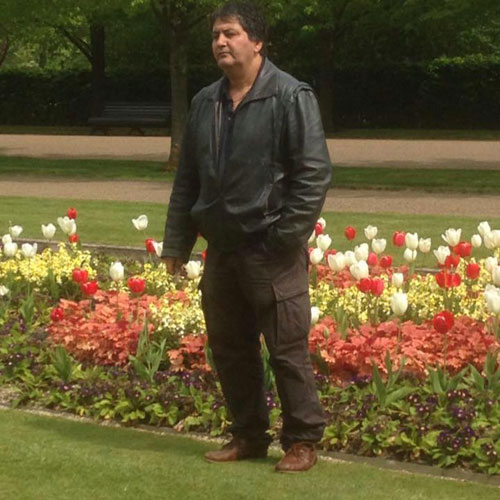 Mark Hill (M.Ofogh) came to Britain from Iran in 1989. He used to serve as an officer in the Iranian army. He spent several years in the war between Iran and Iraq and, after escaping from Iranian army, ended up in a prison camp in Iraq. Mark has two degrees (Science from Iran, and maths with computing from London). Mark has written seven novels ( “ the last scene”(published), “tree of my memories”(published), “I played the Death”, “Frankenstein of our century”, “Their eyes”, “ clinic”, “poem and war”) as well as two plays (“Fighting against Silence”, “Flying Revolutionary Guard”) in Farsi. He has also written a collection of poems and short stories “The last Scene” (published) and a novel “Nightmares” (published) in English

It took me some time to know that Tree. I used to pass it on my way to school. In one wintry day when the roads and trees were covered in white snow and I was passing that tree, she dropt some snow on my shoulder and when I looked at her she smiled and said: hello little boy ; yes it was in a cold wintry day that I found my new beautiful friend. She was so beautiful especially when she was dancing in the wind. I introduced her to my friends and we used to claim and play with her. I remember once when I wanted to claim up I fell down and injured my self
She took me with her arm tenderly and covered all my body with her leaves. My red blood painted her body. I can never forget the comfort and magic smell of her body, after a few moment our pulses and breaths mixed up and became one. it was a moment of absolute calmness and tranquillity, I found my self in a green haven and I became the tree and the tree was me.
After that day every time that I was passing that tree I was giving her a cuddle, but first I had to make sure nobody saw us because they might have thought I was going mad.
Years passed by and I grew to become a young man, I remember the time when for the first time I fell in love with a girl and we painted our names on the body of the tree and I could feel how she was happy for us . She gave some of her yellow and orange flower to the girl that I was in love with; yes I learned from her that girls love flowers.

Some years later madness started, madness and distraction which called itself revolution, fanaticism and brutality that called itself freedom.

During one of these day when roads and all towns were in fir, and smoke and bullets came from every where, my beautiful tree got shot, when I asked her if she was in pain she said: yes pain and sadness but not from bullets but from this madness that tries to replace life with the death, love with the hate, laughter with crying, darkness with light,…yes my beautiful tree was so sensitive and bright.

I remember her death; it was a cold wintry day when revolutionary guards hanged
The girl that I was in love from branch of that tree. My girl friend was in prison for some years and after all these tortures it was difficult to recognise her, her beautiful dark hear was grey and she became so thin that the only thing that was still shining was her beautiful deep blue eyes, but my tree had a very good memory she immediately recognised her, yes in that day they had their last dance together and I lost both of my loves, my girl and my tree. It was in that cold wintry day that I felt the pulses of love dying in me.

Years later after being in darkness and loveless, I was in different place in another part of the world that it happened again. It was on a nice spring day that when I was passing a tree she dropped her pink and purple flowers on my shoulder and smiled at me and again I could feel the pulses of love with in me.