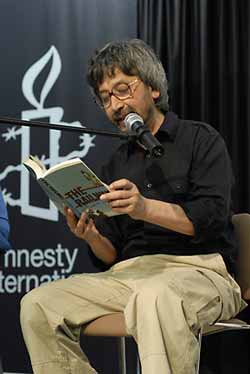 Ismailov’s novel, The Railway, originally written before he left Uzbekistan, was translated into English by Robert Chandler and was published in 2006. A Russian edition was published in Moscow in 1997. His forthcoming novel, will be entitled Comrade Islam and is about a poet in Uzbekistan who ends up in the Taliban’s ranks when the Americans bombarded Afghanistan. Born in 1954 in Kyrgyzstan, Ismailov is an Uzbek journalist and writer forced to flee Uzbekistan in 1992 when he came to the UK. He now works as head of Central Asia and Caucuses Service at the BBC World Service. His works are banned in Uzbekistan. He published numerous books in Uzbek, Russian, French, German, Turkish and other languages. Among them are collections of poetry: “Sad”(Garden)(1987), “Pustynya”(Desert) (1988), of visual poetry: “Post Faustum” (1990), “Kniga Otsutstvi ” (1992), novels “Sobranie Utonchyonnyh” (1988), “Le Vagabond Flamboyant” (1993), “Hay-ibn-Yakzan” (2001), “Hostage to Celestial Turks” (2003), “Doroga k smerti bol’she chem smert'”(The Road to Death is bigger than Death) (2005) and others. He translated Russian and Western classics into Uzbek, and Uzbek and Persian classics into Russian and some Western languages.

There is an Uzbek anecdote about the Kazakhs. An Uzbek came as a guest to the house of his fellow Turk, a Kazakh. Before his departure, as a memento of his visit, he planted a tree in front of his friend’s nomad tent. The next day, when the Kazakh came out of his tent he felt uneasy. “Oh!” he thought. “This tree obscures the view of the steppe,” and he immediately cut down the tree.

This anecdote is more than a symbol; it is a reality. If you travel by train to Tashkent, passing through the Kazakh steppes, you will see that the real frontier between Uzbekistan and Kazakhstan is marked by the transition from burnt steppe to flowering oasis. But I do not intend to imply that Uzbek culture is a higher of better culture than Kazakh culture, or vice versa. They are simply different.

Let me tell you another story. One day I proposed to the well-known kazakh singer (“jirau”) Almas Almatov that he sing one of the ghazals of Akhmad Yasavi (an ancient poet of the 12th century considered a Kazakh poet by the Kazakhs), with the Radif (repeated word) “Utaro”. We tried to make a Kazakh version of this poem (written in ancient Uzbek) and Almas tried to put it to music, but without success. “Why can’t you do it?” I asked him. “You’ve told me that you sing the “Shahname” of Firdausi in Kazakh.” “I don’t know,” he replied. However, we than counted the number of syllables in his lines; there were 11, the same number as the Mutaqorib metre of the “Shahname”, while the number of syllables in the lines of Yasavi’s ghazal was 15. This was the cause of his failure. It was also the basis for my following thoughts and ideas.

Kazakhs and Uzbeks are peoples of the same Turkic ethnic group, but as you have seen above, their cultures, traditions, modes of life and world outlooks are rather different. In order to understand more fully the grounds of this difference, let us begin by comparing two poems on the same subject: a snow fall.