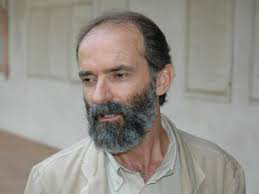 Gëzim Hajdari was born in 1957 in Hajdaraj, Albania, from a family of land owners whose property was confiscated during the Communist dictatorship of Enver Hoxha.
He acquired his early education in his home town, trained as an accountant in the district town of Lushnje, then graduated in Albanian Language & Literature at the “A. Xhuvani” University in Elbasan and in Modern Letters at the “La Sapienza” University of Rome.

He has had a variety of jobs including (in Albania) factory worker, field guard, warehouse man, accountant, land reclamation worker, military serviceman with former convicts, & then, after the fall of the Communist regime, language & literature teacher; and (in Italy) stables cleaner, hoeman, labourer, assistant typographer. At the moment he makes a living lecturing at Italian & foreign universities where his work is the subject of study.

In winter 1991, Hajdari was among the founders of the opposition Democratic & Republican parties of the town of Lushnje, and was elected Republican district secretary. In the same year, together with fellow poet Shpend Sallaku, he co-founded the opposition weekly Ora e Fjalës & worked as its vice-director while also contributing to the national daily Republika. In the 1992 political elections he ran as a Republican parliamentary candidate. In the course of his intense political activity & his work as a journalist, Hajdari often spoke out against the crimes & abuses perpetrated by the old Hoxha regime & by the post-Communist government. For this & other reasons, following repeated threats, he was forced to leave Albania in 1992.

Since 1993 Hajdari, who writes both in Albanian and Italian, has published twelve collections of poetry, two travel books, a long essay (Albanian Epicedium) in memory of the poets & writers imprisoned & murdered by the Hoxha regime, & several translations, including Këngët e nizamit (a collection of the songs of Albanian soldiers conscripted in the Ottoman army). He is the director of the “Erranze” series for Italian publishing house Ensemble & president of the Centro Internazionale Eugenio Montale. His poetry has been translated into several languages & won many awards. A book of essays dedicated to his work was published by Cosmo Iannone in 2010. For his literary merits, Hajdari has been nominated honorary citizen of Frosinone, the Italian town south of Rome where he has lived in exile since 1992.

Each Day I Create a New Homeland

Each day I create a new homeland
in which I die & am reborn,
a homeland without any maps or flags
celebrated by your deep eyes
that chase after me all the time
on the journey towards fragile skies.
In every land I sleep as a man in love,
in every house I wake up as a child,
my key can open every border, unlock
the doors of each & every black prison.
Returns & eternal departures my being
from fire to fire, from water to water.
My homelands’ anthem: the blackbird’s song
that I sing at every season of waning moon
risen from your forehead of darkness & stars
with the eternal will of the Sun god.

FOR YOU MEN OF EUROPE

For you men of Europe who scrape by each day,
for you women of the East who scrub floors or walk
the old people of the West around the block for fresh air,
for you immigrants who sleep on benches & wake up
immeasurably homesick,
for you dossers who’ll have no bosses
& live in peace with the universe,
for you prostitutes who offer your sex to
black men white men yellow men
up to blood-point,
for you blind people forsaken in deepest eternal dark,
for you who are sick & out of work as mercy & solidarity,
for you missionaries comforting the weak before death,
for you peasants who graze your herds &
plough the fields from north to south,
for you mad people who give us free tuition in madness,
for you who are alone & fugitive like me
I write these verses in Italian
& torment myself in Albanian.