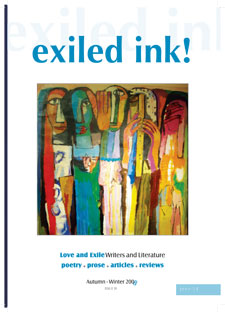 The Exiled Poetry of the Western Sahara

Two Journeys: Yvan Tetelbom and The Reader Within Me by Majid Naficy

Oranges in Times of Moon by Carlos Reyes-Manzo, reviewed by Valeria. Baker

Wedding Day at the Cro-Magnons by Wajdi Mouawad, reviewed by Esther Lipton

If Salt Has Memory edited by Jennifer Langer, reviewed by David Clark

From Baghdad to Bedlam by Maged Kadar, reviewed by Mara Lockowand