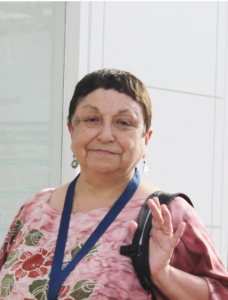 Consuelo Rivera is a teacher, sociologist, feminist Lesbian scholar and narrative memoirist who learned the art of imagination from her grandmother and mother. An MA and PhD in Sociology/Women’s Studies, she has published articles in English and two books of poetry in Spanish (La Liberacion de la Eva Desgarrada and Arena en la Garganta). Currently doing an MA in Publishing at the University of Derby, she is co-author and editor of two anthologies in the series Wonder-Makers: Navigator of the Thames with the Hispano-American Women Writers on Memory group 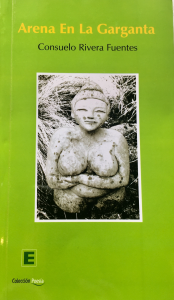 Thinking of you
Consuelo Rivera-Fuentes

I can feel the touch of frosty
songs in the warmth of a
protected cage called
“free land and democracy”.

I can hear the rage of ancient male
rituals, soldiers with no souls,
warriors reeking of death and innocents’ blood raping girls,
their mothers and the mothers of their mothers.

I have not seen my sons grabbing dead
bodies or violating graves over and over
again in lust and obedience to martial law
but you have…, therefore, I have.

I have not been stabbed by prolonged
hunger, the water I drink is clean and tastes
of …nothing Yours tastes of tears, fear, salt
and iron.

There is an abundance of food in my
kitchen, you pick up stale bread and
rotten apples thrown away by the
aggressors.

Once, in dictatorial Chile, a long time ago, I went mad
with the racket and ack-ack-ack of machine guns and water
cannons but I have never experienced the deafening,
sickening blast of missiles and
bombs But you have…, therefore,
I have.

I can see you escaping to
the unreachable mountains of
Afghanistan and Syria
slowly trekking to camps of millions of
refugees silent and empty-eyed.

Global networks and TV display the
remains blasted, burnt down houses in
Palestine;
I look in horror at pictures of girls with their anguished and terrified eyes,
being rescued from the clutches of Boko Haram in Nigeria;
I can feel the long shadow of death in
Iraq all that and more torn by

Weeping girls with sad faces cover their dolls’ eyes
to stop them seeing the horror:
the bodies of other children, the bodies of dead
parents, rubble and mortar in what used to be their
houses.

And I am surprised that in the midst of this
hell a Palestinian woman, who has lost all
her sons,
grows flowers in skeletons of grenades and artillery
shells.
I think of you today
Nigerian girl Syrian woman Afghan sister Iraqi sister Palestinian mother

I look around to see if the Obamas,the
Camerons, the Merkels, the Putins of this
world…
are feeling the same
but all I can see is a wall
of indifference and
greed…

Guns, bombs, missiles and military
invasions have severed this poem….

I can’t finish it!