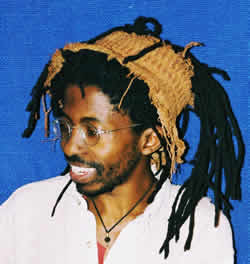 Brian Chikwava, is a Zimbabwean writer and winner of the Caine Prize for African Writing. He is currently working on a short story collection and a novel, The Steak & Porridge Doppelgänger. Brian is also a musician.

On a purple patch of earth, lent its hue by a carpet of jacaranda flowers falling from a nearby tree, a man and a goat are locked in a dogged tussle. The goat, sober as a monk, is 43 years his junior. The man is still slightly inebriated following a night of gallant drinking. Planet earth twirls through the heavens at a dizzying speed while he pins the goat down with his chest and clings to the grass lest he be flung off both goat and planet.The maid, Maria, is absorbing the spectacle through the kitchen window. She claps her hands in the customary gesture of disbelief when her madam, Mrs Moyo, strides into the kitchen.

Aizve, what is Ngoni doing? Is this not a bad omen? I hope we do not hear that the plane carrying my son and his wife has crashed.’ Mrs Moyo claps her hands sharply.

‘Eeeh, the people that Tambu’s father brings us! I don’t know where it is he finds them,’ Mrs Moyo claps her hands again as she heads out for the door, Maria supportively behind her. By the time the two women are in the garden, Ngoni is on his feet yanking the now motionless goat’s head into a large tin dish.

‘Amai?,’ he answers, taking off his cap, and folding like a deck chair into a servile crouch, his hands clasped together in respect. There is no sign of his manhood gone berserk and lunging inconsolably in the direction of the goat as they had expected. So it wasn’t bestiality after all? The women are relieved but don’t show it.

‘What are you doing Ngoni?’ madam interrogates.

‘I was told by baba that the goat needed to be killed and skinned this afternoon,’ he replies rubbing his palms together.

‘How can Tambu’s father ask you to kill a goat by yourself? Did he not say he would find someone to assist you?’

The madam claps her hands again and sighs ‘Perhaps you could have tied the goat down instead of wrestling it on the grass. Now, look, your overalls are such a mess.’

‘That’s what happens at work amai. We are used to it.’

Before the exchange totters to an end, Ngoni, seizes the opportunity to run through the obligatory morning ritual: ‘Er … did you sleep well amai?’

‘We all slept well Ngoni, what about you?’ the madam replies.

‘I slept well amai, apart from being bothered by mosquitoes. If I was capable, I would bite back.’

The women laugh. Ngoni has, by now, completed his repertoire of the body language of servitude, and is carefully placing his cap back on his head. He unfolds his gangling figure to brush off the jacaranda flowers still stuck to his old orange overalls. The women go back into the house, Ngoni picks his knife and turns his attention to the dead goat. The slit across its throat is large enough, but Ngoni is not sure whether to leave the blood to drain into the dish for a few more minutes or to hang the animal up by its hind legs on the low branch over his head. He knows this is necessary for good meat. Not only does it ensure that the blood thoroughly drains away, it is also makes it easier to skin and disembowel the goat. He wanders off for a cigarette break in the tool shed.