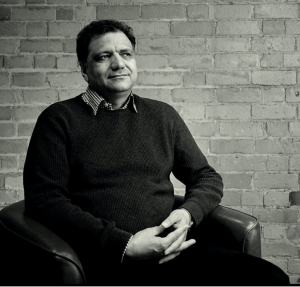 Alireza Abiz (born in 1968 in Abiz, South Khorasan) is a multi-award-winning Iranian poet, literary critic and translator.
He studied English Literature in Mashhad and Tehran universities and received his PhD in Creative Writing –Poetry from Newcastle University in the UK.Abiz has written extensively on Persian contemporary literature and culture. His scholarly book ‘Censorship of Literature in Post-Revolutionary Iran: Politics and Culture since 1979’ is forthcoming in 2020 by Bloomsbury. He has so far published five collections of poetry in Persian; ‘Stop! We must get off’, ‘Spaghetti with Mexican sauce’, ‘I can hear a tree from my desk’ “13/1 Koohsangi Street” and ‘Black Line- London Underground’. The latest collection published in 2017 was awarded the most prestigious independent poetry award in Iran, the Shamlou Award. His sixth collection ‘The Desert Monitor’ will be published in 2020.

Abiz is also an award-winning translator and has translated some leading poets including Rainer Maria Rilke, Basil Bunting, Derek Walcott, Jack Kerouac and C.K. Williams into Persian. His translation of ‘African Contemporary Art’ won him the Iranian Book of the Season Award for the best translation in visual arts in 2007.English, German and Arabic translations of his poetry have been published in numerous journals and anthologies and have been showcased in public places including Stuttgart Underground in Germany. He has performed at many international festivals and acted as judge in numerous literary prizes. He is a board member in Poetry Translation Centre and the chief judge in Sarah Maguire Poetry in Translation Prize.

Abiz is the co-founder of MAHA, a Persian language online platform for art and literature and the PersianLit, a website dedicated to Persian literature in English. He lives in London where he works as a creative writing teacher, translator and researcher.