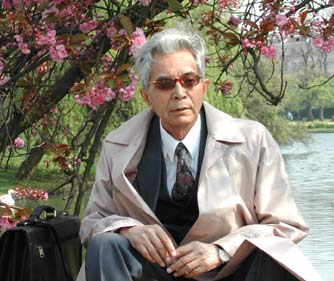 Abdul Karim Meesaq was born in the village of Sarbaid, province of Gekhato, County of Ghazni, Afghanistan in a farmer’s family. His date of birth like many other farmer’s children has never been recorded. It is believed that he is now in his 70’s.

There was no formal schooling in the village where Karim Meesaq was born and brought up. He received private tuition from the village Mullah (Islamic religious priest).

In his youth, Karim Meesaq was forced to leave his village due to a drought and headed to Kabul (Capital city of Afghanistan). In Kabul he began life by doing various physical jobs and at the meantime improved his education and fiercely followed reading. He sought jobs as an office clerk and gained knowledge and experience in various educational and governmental posts. It was then that he started interest in literal and political writing. Since then his many work including collection of short stories books, collections of poems, many political and social assays and articles have been published.

Karim Meesaq is one of the founder of the “Afghanistan’s Peoples’ Democratic Party” and on the 1st January 1965 he joint the party’s 1st Congress and later became a member of the party’s political office.

From April 1978 to December 1979 he worked as Afghanistan’s Finance minister. In December 1979 when the Soviet army invaded Afghanistan he and many other of the Afghanistan’s Peoples’ Democratic Party cabinet members became imprisoned. After his release from prison he lived in Kabul under house arrest for about 10 years and was not allowed to publish any of his work.

After the Soviet army left Afghanistan and when Dr. Najeebullah (Former president of Afghanistan) proposed National Peace Compromise Policy, Karim Meesaq, became the Mayor of Kabul city in June 1989. He worked in this post till September 1990. In December 1990 he immigrated to London, Great Britain.

Since living in Britain he has written many books and poems in Farsi-Dari, some of which have been translated into English. Some examples among his translated work in English include.

Short stories: A Sum of Money, Apple, Cascade of Human Mind, Image on the Waves, The Defence, The Pomgranate Tree
Poems: The Soul of Anemona, Poetic, The Home of Human Being, Green Words, Poetry

The Defence
By Karim Meesaq

It was a winter evening. The neighbour’s wife had already been in labour for three nights and her cries of pain resonated all over the neighbourhood.

Nazir had tried everything to block out these cries but without success. There remained nothing for it but to close his book and pull the bedclothes over his ears. But even in bed, the cries followed him and every time he shut his eyes, the screams penetrated his being like poisoned arrows. They tortured his body and prevented him sleeping. It was unbearable. He got up and dressed. His mother asked “Where are you going at this time of night?” Full of pity, he said “To the doctor’s, after all, this woman is a human being too! A woman suffering, surely she must he helped.” His mother for whom the pain of birth was nothing new, said nothing. He took her silence for agreement, left the house and ran quickly to the doctor’s home. His footsteps, crunching on the ice, cut through the anxiety-ridden silence of the night. On his face was the icy cold of the wind; in his ears were the wails and whispers of the neighbour. Although he had drawn up his collar over his ears, they stung with the cold and the ever more pitiful cries echoed after him. Sometimes the cries were drowned by dogs barking, but not for long; they resounded in the air and tormented him.

About an hour later, shivering with cold and accompanied by the doctor, he knocked on his neighbour’s door. No one answered. Only the distressed, imploring cries of the woman responded. “Oh God, have pity on me. I am burning. It is like fire. Good neighbour, help me. Save me. For the love of God, help me.” Occasionally the cries stopped, sometimes they grew louder and then again developed into howls, to very loud, pitiful howls. He knocked harder on the door. At last, someone answered “Who is there?”
“Your neighbour.”

The door chain rattled and the door opened. Under the porch light a man of medium height could be discerned. He had a short, thick neck, a long, dark beard, narrow eyes, flat nose, yellow teeth and a pot belly. There was a dirty white turban on his head and he wore a shirt and wide trousers of coloured cotton. Over these was a colourful jacket. He stared in shock at Nazir and the doctor and asked ‘What do you want?” Nazir stepped forward respectfully “I am a neighbour of yours and have brought a doctor for your wife.” The man muttered incoherently into his beard and said after a pause “I know you. I know you.”

Other than that, he said nothing. He blew his nose, spat out snuff, turned around silently and shut the door. Nazir and the doctor waited, not knowing what to do. They could still hear the heartrending moans of the woman. They shifted from one foot to the other with the cold, waiting expectantly. But the door was shut and remained shut.

Nazir knocked once again. No answer. He knocked again and again. Still no answer and again he knocked. No reply. The desperate cries of the woman were heard, louder and louder. The doctor, whose patience was at an end, hit the door with his fist. Then he kicked the door. At this, all the neighbours stuck their heads out of their windows. When they saw Nazir with the doctor, they were relieved and came out one by one to greet them and join them at the door. They all knocked, one after the other, until a voice from inside said “Go away. We don’t need a doctor. I won’t allow a stranger to touch my wife.”

When they heard this, they looked at each other astonished. On of them banged hard on the door and called out jokingly “Open up, open up or we’ll knock down the door.”
The man answered from within “Alright, wait. One moment. I’ll open the door right away.”

After a time the door opened. The man, who stood in the doorway with an axe in his hand, said in a hurt and sad way “Well here I am and I’d like to acquaint myself with the fellow who dares to come into my house. Don’t think that I would bring shame upon myself, that I am a coward. It is a point of honour. It is to do with my honour. Go away or I’ll defend myself with this axe – with this axe.”

He swung the axe threateningly in the air. Then swung it again. Everyone was speechless and so they went away into the bitter cold and eerie darkness, towards the respective lights of their homes, one after the other.

The next morning the woman’s cries were not heard. All the funeral mourners, full of sorrow and sympathy, said to the man, who was draped in a long cloak and stood in a reverent manner by the grave “We are very sorry, very sorry for your loss.”