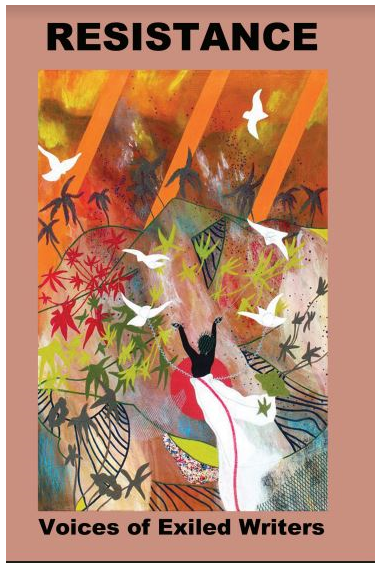 20 years of writing by members of

Exiled Writers Ink joyfully celebrates 20 years of the organisation’s existence with “Resistance – Voices of Exiled Writers”, an anthology dedicated to those resisting oppression in all its many forms and to those who died fighting for their just cause.

This special book comprises one chapter for every year from 2000 to 2020. Each chapter represents an aspect of the organisation’s literary activism work and support for those resisting human rights abuse. From Kosova, Ethiopia and Afghanistan through Zimbabwe, the Uyghurs, Iran, Kurdistan and the Western Sahara, plus many other areas, and culminating with a chapter on #BlackLivesMatter, here are the voices of writers in exile, championing their causes and resisting the attempt of powerful groups to suppress the truth.

Exiled Writers Ink https://www.exiledwriters.co.uk/ was founded by Jennifer Langer in 2000 at a time when refugees were frequently stigmatised as disempowered, uneducated victims intent on exploiting the host society’s welfare and other systems. Its mission was to defy that narrative and disrupt existing stereotypes. With a passion for justice, it enabled refugee writers’ voices to be heard so that insights could be gained, not only into the pain suffered by refugees, but also into the complexity of the experiences of writers from diverse regions.

pes can be ordered from https://palewellpress.co.uk/#Resistance and Amazon, Foyles and Waterstones websites

Palewell Press is an independent publisher handling poetry, fiction and non-fiction with a focus on human rights, social history, and the environment. For more information about Resistance – Voices of Exiled Writers, or to request an interview with Jennifer Langer, founder of Exiled Writers Ink, contact Camilla Reeve on enquiries@palewellpress.co.uk or 0771-332-7217

Innovative magazine reflecting exciting, different voices in a new cultural environment. Literature, discussion, commentary.The magazine is unique in providing an insight into dislocation and cultures of exile, both through the voices of exiled writers and through their literary work. Exiled Writers Ink has published 14 issues of Exiled Ink magazine which are available to order.