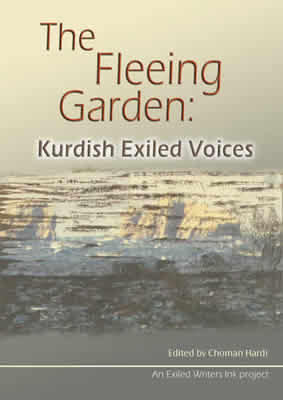 Reviewed By Bianca Brigitte Bonomi for the Institute of Race Relations.

Reviewed By Bianca Brigitte Bonomi for the Institute of Race Relations.

The organisation Exiled Writers Ink has published a collection of poems and stories by Kurdish writers living in England. The anthology, entitled The Fleeing Garden: Kurdish Exiled Voices brings together writers from a variety of Kurdish backgrounds, and platforms the work of both established and aspiring poets.

The variety of subjects explored in the anthology, which derives its title from Kareem Omar’s opening poem, reflects both the range of regions and countries drawn from and the individual concerns of the poets. The process and reality of exile is succinctly, yet powerfully conveyed in Huriye Gunes’ ‘Arrival’: ‘Our journey took 24 hours./ When we arrived/ we had left behind/ our childhood and a wonderland.’ Within just four lines, the poet captures the transient nature of a life in exile. The duration of a day marks the dawn of adulthood and an irretrievable loss so that the break with the past becomes a break with the self. This is also evident in the prose piece ‘Leaving’, by Sevar Mohammed Najat, in which the speaker flees his village to escape the war and the reminders of death and battle embedded in the environment. Yet he admits paradoxically that ‘I am leaving my beloved home to bid the perpetual reminder of death farewell, but either way, I will die as I leave’.

In the beautifully poignant ‘Promenade’, by Hiwa Reza, the mountains bear the scars of brutality, with war wounds manifesting themselves in the form of ‘holes made by freshly exploded mines’, whilst the loss associated with exile is similarly reflected in the destruction and decomposition of the man-made environment, lined with ‘Burned houses’. This visual mark of domestic degeneration finds an even greater symbolism within the human. The barrenness extends to the body, with natural processes becoming disabled, so that the self becomes a reflection of the environment and the speaker is left, ‘Crying without tears/ The dried oceans’. The exiled man, like the charred and blistered houses, is reduced to a dry husk, an empty shell, becoming little more than ‘An ex-man, a zombie’.

Poems are interwoven with reminiscences of the homeland, but are also laced with the bitter realisation that for many exiles, the land of birth will only ever be a distant memory. Sevar Mohammed Najat explores the tension created by exile in ‘Good morning Kurdistan’, in which the speaker repeatedly salutes his homeland and its inhabitants, whilst admitting that it is a ‘land I’ll never know’. The final line, ‘I say good morning to you/ like a passer-by I don’t quite know’ elucidates the alienation felt by the exile community, both a part of, and a severed tie with, their native country. The idea that Kurdistan is both anterior to the speaker’s present life and central to it is suggested by the fact that the speaker salutes his country like a ‘passer-by’, a mere acquaintance as opposed to a true friend.
Uncertainty is a prevalent theme in many of the poems, highlighted through the rhetorically titled ‘Can We?’, in which Huriya Gunes asks the collective audience ‘Can we leave the war behind?/ Can we?/ But/ How and why?’ Similarly, in ‘Walking’, another poem whose title refers to motion and instability, Yasin Aziz explores ‘the huge gap of boredom’ experienced by exiles in a foreign land and the nameless speaker ‘wonders, when, how, what is the end.’ The subject occupies a monotonous, dreary world in which time is a seemingly endless expanse which needs to be filled, but his torrent of questions finds no resolution.
In ‘Promenade’, the audience is confronted by the weight of the speaker’s sadness and unsurety and the poem is characterised by the exile’s recognition that his future is unknown and indefinite. The desire to return to his homeland pervades his heart as ‘He flees his country/ Hoping to return/ One day certainly’, but this firm conviction is swiftly and deftly replaced by mere possibility, ‘One day, maybe’. The undercutting of the former statement with the harsh reality of the latter recalls Voltaire’s recognition that whilst ‘doubt is not a pleasant mental state, certainty is a ridiculous one’, a truth which is demonstrated by many of the poets. Reza similarly exposes the exile’s lack of certainty when he abandons his homeland through the use of the unanswered question ‘(For how long?)’, placed in parenthesis to emphasise its status as an aside; a question that torments the mind but one that cannot be resolved, a question which will one day become a sheer memory itself. The landscape, those ‘magnificent mountains of Kurdistan’, drifts into the realms of memory, becoming a ‘Mountain of souvenirs’, before transforming into a metaphorical ‘mountain of questions/ Of unknowns’, a peak of uncertainty which cannot be crossed. The final line of the poem highlights the exile’s need to cling to hope in an increasingly uncertain world, hoping that the future will bring ‘maybe at last/ A free land’.
The possibility of one day achieving peace and freedom through violent resistance is explored in ‘Last night the rain’ by Sevar Mohammed Najat, a poem which highlights the exile’s continuing preoccupation with his homeland. In the poem, the speaker addresses the rain, who tells him of the death and sadness that he has witnessed. He reveals that if the ‘peshmergas’ could see the land that they had struggled for, ‘they would think their death and pain were all in vain.’ The poem ends with the statement that ‘hypocrites live the longest lives/ and true men lay waiting in their cold graves’ in which the simplicity of the rhyming couplets used throughout the poem is briefly broken, serving as an uncomfortable reminder of lost potential and of the difficulty in achieving peace.
In ‘Instructions’, Huriye Gunes promotes forgiveness by issuing the reader with a series of orders that contravene the notion of the honour killing. The speaker anticipates his own death by begging for his killer not to be harmed because ‘he is the one who has been cheated/ told what to do, say and think’, requiring the audience to treat the murderer not with hate, but with pity.
From the deceptive simplicity of Huriye Gunes’ ‘My Sister’, to the political embroil of Awat Namiq Agha’s ‘Prepare for darkness’, the anthology captures a sense of exile in all its manifestations. Throughout, the creative expression of refugees and of exiled writers is used to encourage cross-cultural dialogue and the result is an anthology which combines social and historical relevance with literary merit.

The Institute of Race Relations is precluded from expressing a corporate view: any opinions expressed are therefore those of the authors. 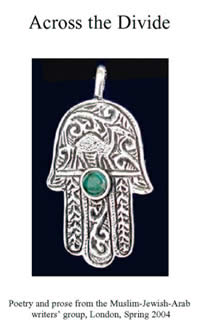 Across the Divide is an innovative anthology of prose and poetry created in EWI’s Across the Divide creative discussion and writing sessions for Jews, Muslims, Israelis, Palestinians and Arabs generally.

Chap books produced in the Mentoring and Translation Programme 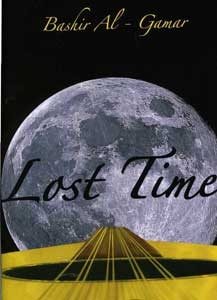 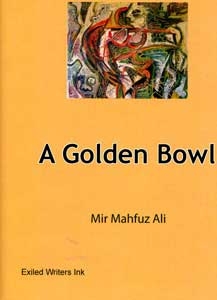 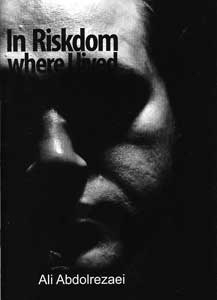 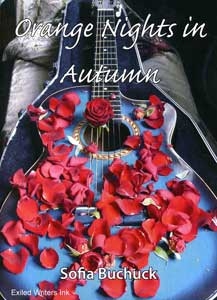 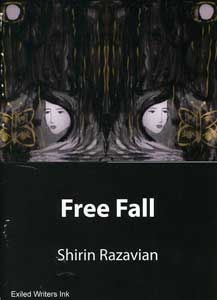 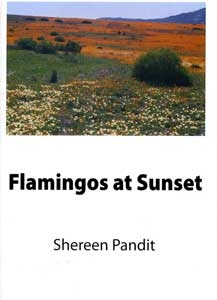 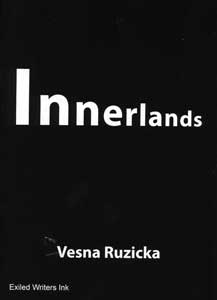 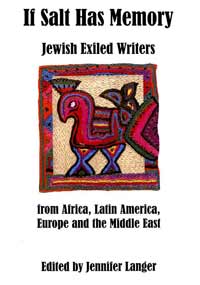 If Salt Has Memory

If Salt Has Memory explores exile in the modern Jewish world. The book is not directly connected to the Holocaust, but reflects another layer of Jewish exile among those who had to leave their homes for political or literary reasons. In many cases, however, the book gives voice to those who had to leave in the face of ethnic cleansing.

If Salt Has Memory comprises essays, memoir and fiction by Jewish writers in exile from many lands — contributors include the former leader of the Tupamaros guerrillas in Uruguay, a philosopher from Tunisia, a playwright from Zimbabwe, and writers from Yemen, Libya, Bosnia, Cuba. Poland, Ethiopia, Turkey, Hungary and South Africa. Jewish writers in exile from Iraq, Iran and South America are well represented. Many of the essays appear in English for the first time.

Contributors include Andre Aciman (author of Out of Egypt); Eli Amir (Farewell, Baghdad); Ariel Dorfman (Death and the Maiden); Moris Farhi (Children of the Rainbow); Nairn Kattan (Farewell Babylon); Sami Michael (Trumpet in the Wadi); Gillian Slovo (author of the Orange Prize short-listed Ice Road); George Szirtes (winner of the TS Eliot prize for poetry); Albert Memmi (The Colonizer and the Colonized). Many other contributors are also well known internationally, writing in English, Arabic, Hebrew, Spanish and other languages.

Jennifer Langer established Exiled Writers Ink – the organisation of refugee writers, based in London. She is the daughter of refugee parents and the editor of three previous Five Leaves collections by refugee and exiled writers. 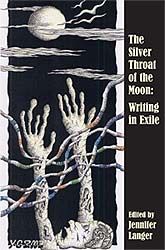 THE SILVER THROAT OF THE MOON: Writing in Exile (includes essays on the literature of exile)

Five Leaves Publications is pleased to announce a new anthology by refugee and exiled writers. Silver Throat of the Moon includes prose and poetry from writers originating in countries as diverse as Algeria and Zimbabwe, Somalia and Iran, Kurdistan and Afghanistan.

As well as poetry, memoir and fiction the collection includes a series of essays about being writers in exile. These articles range from the difficulties in holding on to traditional rural imagery in Somali literature through to the, perhaps temporary identity of a whole generation of young writers of Algerian origin whose lives have been spent entirely in France.

Some contributors, including, Choman Hardi, Sousa Jamba, Reza Baraheni, Yang Lian, Dubravka Ugresic and the late Miroslav Jancic are now well known internationally for their writing in English; others, including Maxamed Ibrahim ‘Hadraawi’, Ziba Karbassi and Saadi Youssef are appreciated internationally but may be new to readers of English. Many of the writers are members of Exiled Writers Ink – a London-based organisation set up by Jennifer Langer, editor of Silver Throat of the Moon.

CROSSING THE BORDER: Voices of Refugee and Exiled Women Writers

Women and children make up 80% of the world’s refugee population, yet their voices are seldom heard.

In Crossing The Border, women writers from Somalia, Afghanistan, Algeria, Iran, Iraq, Kurdistan, Turkey, Northen Cyprus, Bosnia, Kosova and the Congo tell their stories. All the women are refugees or are living in exile.

In addition to the stories and memories, Crossing The Border includes articles on women’s lives and on women’s writing in each of these countries.

Those publications are available from selected bookshops and direct from

THE BEND IN THE ROAD: REFUGEES WRITING (plus Teaching Pack)

The Bend in the Road Teaching Pack

Refugees bring with them a new culture, language and perspective. The writer in exile can be a link between cultures, nations and peoples. Exile is one of the earliest phenomena of human existence.

In this book, recent refugees describe their lives in fiction, poetry and memories. Most of the contributors are well-known in their countries of origin – Miroslav Jancic (Bosnia), Sherko Bekas (Kurdistan), Buland Al-Haidari (Iraq), Pius Ngandu Nkashama (Zaire), Maxamed Ibraahim ‘Hadraawi’ (Somalia) and many more.

As well as refugees’ own writing, The Bend In The Road includes an outline of the political history and literary tradition of the countries covered.

Jennifer Langer, herself the daughter of refugees, works in refugee education in London.

“This book should be compulsory reading for every Home Office official and immigration appeals adjudicator.” Race and Class.

“The breadth of the material is impressive.” Times Educational Supplement.

Those publications are available from selected bookshops and direct from