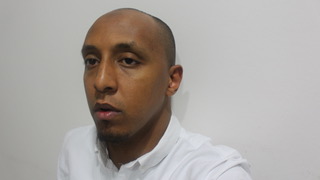 Samatar Elmi is a poet, PhD candidate and educator. His writing plays in the liminal spaces between racial, socio-cultural and political identity claims. He has been shortlisted for the Venture Award, the Complete Works II, New Generation African Poets and is a graduate of the Young Inscribe Mentoring Program. Poems have appeared in Magma, Iota, Ink Sweat and Tears, Myths of the Near Future, Scarf, the Echoing Gallery, and the Cadaverine.

The Hope and Anchor

An imam stands where the last barmaid called last orders,
his jukebox of aythaan and ayaat, his little number.

Worshippers squeeze into rank and row – face Mecca –
as once punters, rasping for that one-for-the-road,

faced-off for the last pitcher. Empty beerlines, still clipped to walls,  snake to a cellar parched with prohibition.
Where once the fount was stocked with cask and cork - now a beer garden bench for alif, baa, taa …
The lyric of a liquor bottle rack, a song of defiance sung by the ghost of Jim Beam through the palimpsest.
And a wooden sign above the door: The Hope and Anchor,
which the imam kept – a portly reminder that God’s house
is al-amala wa marsaat, that others gathered here before to escape, to quench a thirst, until last orders.

The Invaders
“England must be reconquered for the English. They should go back from whence they came.”  John Townend (Former Conservative MP)   I am parrot’s feather, pennywort water fern and primrose. I am the susurrus of grey squirrels in the branches by your window.  I carry crayfish plague through fenland wash and highland stream. My thick roots tear at the bedrock under country lane and urban street.   I am a London gang of parakeet; the coypus close to you as skin. I’m your tenant and your landlord. Things will never be the same again.
My Mother is in a Different Language
“The words of this language are to refer to what can be known only to the speaker; to his immediate, private, sensations. So another cannot understand the language.” – Ludwig Wittgenstein

My mother is in a different language.  It didn’t matter when she took her oath  of burden, placenta and breast milk,  her promise of patience and insomnia that she clung to for seven thousand nights of drifting in and out of speechlessness.
No one saw the nurse sever the umbilical cord,  our first and last line of unbroken communication tossed into a medical waste bin;  or the doctor mutter faint instructions in English for the nurse to rock me asleep with lullabies  my mother couldn’t understand.   No one thought it odd that a mother and son should bring a translator to parents’ evening to bridge between their broken tongues.
The swirling cacophony of waar muxu leyahay  and what’s she on about making it easier to just kiss her forehead in silence.
How did we get here, eighteen years of false starts, sat apart in a courtroom, this time an unbridgeable gulf,  my mother shaking, shaping words like a prayer
except that hooyo, hooyo, maxhaad samaaysay? isn’t a prayer – it’s a question I can’t answer in a language she understands.
Hooyo, hooyo, maxhaad samaaysay – roughly equivalent to ‘my son, my son, what have you done’.
waar muxu leyahay – roughly equivalent to ‘what is he saying’