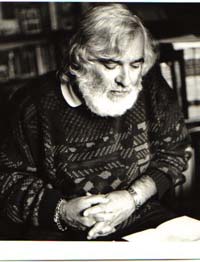 Received B.A. in Humanities from American College Istanbul, in 1954.

Came to the UK the same year and trained at The Royal Academy of Dramatic Art. He graduated in 1956 and settled in London.

After a brief career as an actor, he took up writing.

He has written many television scripts; a film, The Primitives; and a stage play, From The Ashes of Thebes.

Children of the Rainbow has received two prizes: the “Amico Rom” from the Associazione Them Romano of Italy (2002); and the “Special” prize from the Roma Academy of Culture and Sciences in Germany (2003). The French edition of Young Turk (Jeunes Turcs) received the 2007 Alberto Benveniste Prize for Literature.

His new novel, A Designated Man, will be published by Saqi/Telegram in March, 2009.
His poems have appeared in many British, US and European publications and in the anthology of 20th Century Jewish Poets, Voices Within the Ark (Avon, US, 1979).

He has also published short stories in anthologies and magazines in the UK, the US and Poland.
His essay, The Courage To Forget, appeared in Index on Censorship (Vol.24, No.2, 2005). Another essay, God Save Us From Religion, is included in the collection, Free Expression is No Offence (Edited by Lisa Appignanesi, published by Penguin Books, 2005) A third essay, All History is the History of Migration, given at the “Know Your Place?” Conference in November 2005, was also published by Index on Censorship in 2006.

To date his works have been translated into Arabic, Dutch, French, Galician, German, Greek, Hebrew, Italian, Polish, Romanian and Turkish.

On June 16, 2001, in the Queen’s Birthday Honours List, he was appointed a Member of the Order of the British Empire (MBE) for “services to literature”.

On November 2001, he was elected a Vice President of International P.E.N.

He is a Fellow of both The Royal Society of Literature and The Royal Geographical Society.

He is married to Nina Farhi (née Gould), a psychoanalytic psychotherapist, and has a step-daughter, Rachel Sievers, a speech therapist.

Yesterday, the poet, al-Ma’ari, told us,
there were two kinds of leaders:
those with brains and no religion;
and those with religion and no brains

Today, unquiet souls warn us,
leaders have congealed into one kind:
those with no religion and no brains

yet the people strive to survive
and
the skies
the sun
the sea
mountains and forests
love for life and wisdom to create
are still here,
defiant
and myths and prophecies
of clement times
are still remembered

Tomorrow, the unborn will say
there are
no skies
no sun
no sea
no mountains and forests
no love for life and no wisdom to create
and myths and prophecies
of clement times
will have been effaced
because

there are no people left