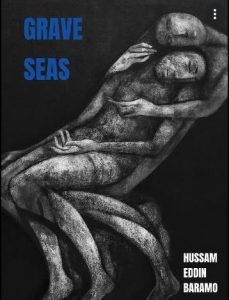 The copyright painting by Ismail Al-Rifai. appears on the cover of Grave Seas, Hussam’s poetry collection, published 2021 by Palewell.

Hussam is a poet and journalist who was born in Syria and whose poetry collection in English is Grave Seas (Palewell, 2021). He co-founded a publishing company Al-Wa’l in Damascus and having endured the repression that crushed Syria and the clandestine leftist party to which he belonged, he fled to Cyprus and in 1994 moved to London. When the Syrian uprising against the Syrian regime began in 2011, he was part of the creation of the Syrian Writers Association, and served as vice-president and editor-in-chief of Awraq, its cultural publication (2012-2019). Hussam’s previous publications include a poetry book Poisoned Kohl (2012) and short stories. He translated Introduction to Slavoj Zizek and Post Orientalism, by Hamid Dabashi (2013).He currently works as managing editor of Al-Quds Al-Arabi newspaper. He is a columnist and political analyst and has been a speaker at universities, conferences, TV programmes and seminars as well as a contributor to debates.

The bombardment stopped
The children went out.
A wounded pigeon landed limping
One of them suggested:
“Let’s play the fighters’ game.”

Holding the pigeon, he started whistling.
Another one had a better idea
“Let’s play the game of dead people.”
The spread their bodies on the ground and laughed.

When the fighters came back
heading to the children’s village
throwing an exploding barrel
The pigeon fled and flew.
The children’s thoughts hovered above them:
“Are we children playing the dead people game
or is this our souls flying in the air?”