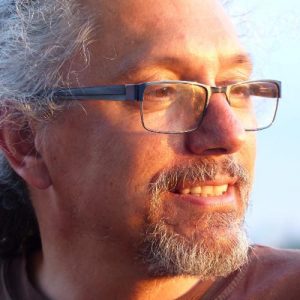 Ali has written and published various literary and journalistic works in Kurdish, Dutch and English. In November 2021, he self-published his debut novel “The Glass Wal” in the English language by establishing the publishing house Afsana Press (www.afsanapress.uk). As an ex-refugee, originally from Iraqi Kurdistan, he has personally experienced some of the protagonist’s hardships in this novel, including a few weeks living in a desert. Since he left Iraq in 1994, he has lived in various countries, including fifteen years in the Netherlands. He studied sociology in Amsterdam, where he was also the editor-in-chief of “exPonto Magazine”. In 2012, he moved to London and has since spent most of his time writing, including a part-time freelance job reporting news from Iraq for the English language outlet INSIGHT. In 2019, he completed an MA in creative writing at Birkbeck, University of London.
In 2011, he published a novella in Kurdish, titled “The Man who was a Tree”. He has rewritten this book into a more comprehensive novel in English, planned to be published in the summer of 2022 by Afsana Press.
More information: www.goranbabaali.com

An excerpt from The Glass Wall

‘Listen, young man!’ said the old man, his metallic voice coming now directly to the young man’s ear, which made him recoil. At the same time, he heard the old man’s own voice inside the cubicle, muffled, and in another language.

‘The only way to be let in is to have a good story,’ the old man continued.

The young man lifted his head and stared at the older man. What did he mean?

‘Here is the procedure,’ the old man added, releasing the mouse, bothering, at last, to look at the young man. He took off his glasses and said, ‘You tell me your story. I type it into this computer and send it on to the authorities. It’s up to them to decide whether you pass or not. If they allow you to come in, I open the door for you.’

The young man looked more closely at the glass between them. There was indeed a rectangular outline in the glass about two metres high and less than a metre wide. It was a glass door, held by a thin metal frame, hardly visible. No lock. And the glass was about five centimetres thick. He pushed on it, but the door did not move. How was it possible? How could it be locked without any lock? He hammered on it with all his strength but in vain.

‘Don’t get agitated, boy. It’s set to lock magnetically and can only be opened electronically. Only when your asylum request is granted, will I get a code with which I can order the computer to open the door for you. But it’s impossible to break it open. I’m telling you.’

The young man took a step back and saw his own, faint reflection in the glass. Dishevelled hair and a beard of a few weeks covered his bony chin and cheeks in a disorderly fashion. His tanned face was as dark as his arms which ached from sunburn.

The old man stared at him from the other side of the glass, as if waiting for some reply.

‘And when you’re through the door,’ the man started again, as there was no response from the young man, ‘you’re not in yet.’ He leant forward and pointed to the space in front of his desk. ‘Don’t you see that you’ll end up inside the turnstile?’